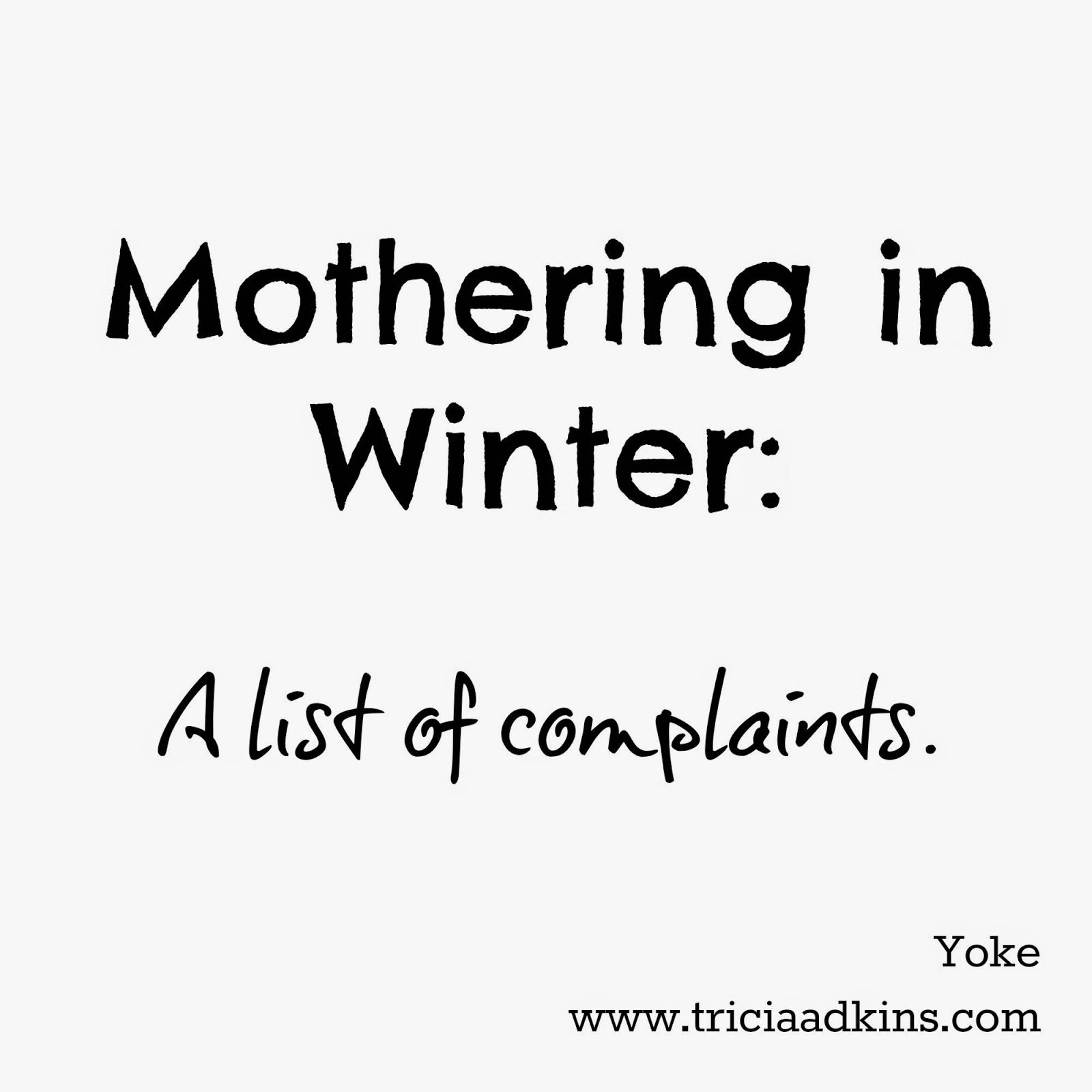 Another week is ending and of course, I can't let the weekend slip in without my weekly list of complaints.

Note: my blog traffic has tripled since I began complaining on Yoke. Thanks for keeping it real (negative) with me! It is affirming to be recognized for my complaining skills.  Now, let's get on with it.

I love being a mother. However, I could never say: "I have no complaints."

Most of my motherhood complaints revolve around the winter. Mothering in the winter months is no joke. No wonder all those settlers died--it seems it was probably easier to just give up, than deal with being a parent in the polar vortex, with snow, germs, homework and well, other people.

Without further complaint, here is my list of why mothering in the winter sucks:

However,  IT IS IMPOSSIBLE TO SHOVE A WRITHING CHILD IN A CAR SEAT WITH A GIANT GAP PUFFY COAT ON. I can barely get the boy into the car seat when he is naked.

Clearly, this info graphic is idiotic. Anyone who can shove their coated child into a car seat is MacGyver.

2. Coats and The Car Seat Part 2
Anyway, I hate the car seat and the coat. I carry my un-coated child out to the car. We get out of the car and I take 45 minutes to put the coat on him. Sometimes, if we are running in somewhere super fast, I don't bother with the coat.

When he is coatless,  no less than 45 people remind me that it is cold. By me, I mean they begin speaking directly to my toddler: "It is cold little guy, where is your coat?"

Needless to say, my son, who loves me, just yells "NO!" and on occasion, points an angry finger in their direction. God bless that barnacle boy.

3.  Gloves
Have you ever tried to put a pair of gloves on a tiger? Maybe you've tried to put clothes on a camel.

Anyway, if you have not tried either of these endeavors, just swing by my house and get gloves on my 8, 6 and 2 year old. They are super cooperative, although one spits and another scratches and another somehow loses the glove while putting it on her hand.

4. Runny Nose Inspectors
Beginning in November and ending in June, each of my children have a snot filled nose. From my casual observation, it seems most of your children are afflicted with the same around the clock snot fest.

No one is sick, everyone is simply filled with snot. We probably all need more fresh air and an allergist appointment.

Anyway, at every event I attend there is one mother who is the Runny Nose Inspector. This is the woman who points out the runny nose, chases her own children (who probably have a stomach bug brewing) around with antibacterial gel and keeps asking if your kid is sick. She is the same woman who addresses the situation by looking right at my toddler and saying: "You need a tissue silly boy!"

Well, you need to stop talking to the kid, SILLY LADY, clearly he cannot answer you because his mother is a total train wreck and brings him out in public when he is clearly battling the plague. In fact, you should probably call those child protection people, because that silly boy, needs a SILLY TISSUE, every five minutes and absolutely screams like a hyena every time his nose is wiped.

Better yet, look and me and say: "You poor mommy. You need a massage! Here is a gift card!"

5. Hot Chocolate
Remember being a kid and racing in from a long day playing in the snow for your cup of hot chocolate and marshmallows? Remember how your mom would make such a big deal out of making it and how it was a special treat. Remember realizing that it is just powdered mix and some hot water.

And thinking, really this is no big deal?

Well, it is a big deal. No one ever actually finished a cup of hot chocolate. Someone always spills it. It is always too hot. Then it is too chocolatey. ( Apparently to my children the name, "Hot Chocolate" provides no clues to what they are drinking.)  Then the marshmallows melt and someone is accused of stealing marshmallows out of someone else's cup. Then I begin yelling and everyone begins crying and I make myself hot chocolate spiked with Bailey's.

There you have it. . .now, since it is Lent, I am off to lock myself in the bathroom with my Bible and pray that I will make it until bedtime. We are out of marshmallows and the children are looking hungry.