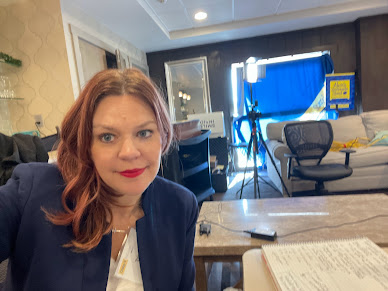 These past two days, I sat in conference rooms listening to some of the most prominent scientists present on their pediatric cancer projects. When I say prominent, I mean that these scientists will be the ones who cure childhood cancer.

When they spoke they would throw out phrases like "compounds with good oral exposure" and "proteomics" and "chimeric targeting molecules" and "targeted protein degraders" and show a myriad of beautiful charts and graphics and diagrams and models. Some of it I understand--like compounds with good oral exposure are those compounds that have a good potential of being made into an oral formulation (i.e. a pill) and proteomics is the study of proteins and in this context the proteins that drive cancer.

But, much of it, especially when the scientists really get going, flies right over my non-scientist head. I'll figure it all out someday--that's the fun of science--solving the mystery. But, in the end, it does not really matter how much science I decode, because when I got those scientists in my interview chair, they talked about other things, like hope.

I am familiar with hope--it is the only thing that kept us going in the days that followed Lily's diagnosis. Even now, when I feeling scared about her future, I pray for more hope. But, still, hope can sometimes feel like a throw away word, right? A generic thing you tell people to have when they are devastated and you have no idea what to say to cheer them up.

So, after about eight researchers talking about hope, I finally asked one, who was also a clinician who treats kids with osteosarcoma, what's so important about hope. He kind of gave me a funny look, but then took off his glasses to wipe away a tear and said, "hope is everything."

I asked others the same questions--one researcher told me hope is so important because even when things change, you can still have hope. You might hope for different things--like Alex Scott, who founded Alex's Lemonade Stand Foundation, she hoped for cures for other children even when she probably knew she wouldn't get a cure for herself. Another researcher told me that she felt like they've failed kids--and the hope that someday she will have optimal, effective, side-effect free treatments to offer kids with cancer is what keeps her going.

Hope is what allows you to face each day, she said.

The group of scientists this week are a really unique gang---each of them working on a collaborative, cross-institutional project funded by the Alex's Lemonade Stand Foundation Crazy 8 Initiative. This grant funding mechanism brings together chemists with biologists with big pharma with oncology clinicians to accelerate research into the most deadly pediatric cancers.

In those Crazy 8 labs, where they are growing cell lines and building models of tumors and building libraries of molecular glues and trying to drug the undruggable MYC protein that drives neuroblastoma and medulloblastoma, they are also growing and building hope. And they aren't doing it accidentally--they are doing it with purpose.

Hope, I believe, is as much a fuel to science as the actual scientific expertise is. Without hope, why bother to try a risky experiment? Without hope, how could you ever dream of curing childhood cancer? But with hope and science, there is the firm reality that the future will be better for kids facing childhood cancer, that diagnosis days will be different than they are now and that kids, kids who are like my daughter, will live.