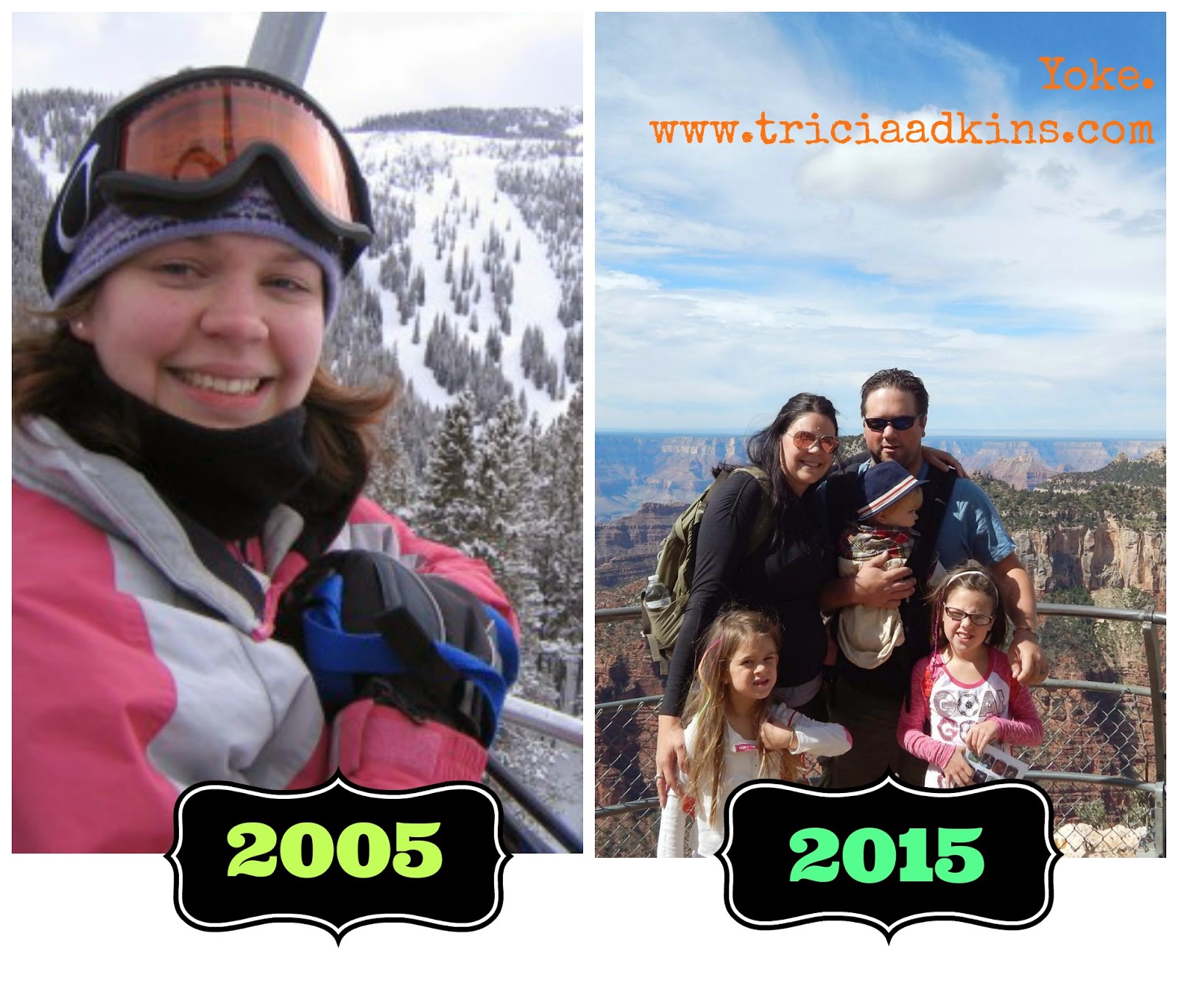 In 2005, I am vacationing in Breckenridge Colorado and while, I am smiling in the picture, the lift has just stopped moving and I am dangling in the air, ready to jump to end my horror. I keep reminding Mike not to drop my camera.
In 2015, I am also smiling, yet horrified a gust of wind will send my toddler son into the Grand Canyon. I spent most of the trip reminding Mike not to accidentally drop a child into the canyon.

In 2005, We do not have any children. In fact, I dislike children and refer to people with more than one child as breeders.
In 2015, We have three children. I still dislike children; yet I find myself constantly surrounded by them, so they are starting to grow on me. I have been called a breeder by at least 17 people.

In 2005, I work managing, launching and fundraising for an Australia based non-profit that gives glasses to blind people in Africa. My job is stressful. Sometimes I dream about running around ripping glasses off people and breaking each pair under my foot. I have a weird hatred of glasses.
In 2015, I have 45 jobs; but really I am a stay-at-home mom who dabbles in public relations, marketing, organic baby food pitching, writing and teaching yoga. I love sunglasses. I never think about breaking eye glasses; however I have broken all our wine glasses (by accident.). So I drink wine out of a water goblet.

In 2005, We live in a bungalow which we lovingly restore on the weekends and often entertain friends (without children). I spend Spring gazing out of the upstairs bedroom windows at a gorgeous magnolia tree and thinking that someday, maybe, when I like children, my gorgeous, well behaved children will gaze at same tree dressed in Lilly Pulitzer.
In 2015, We live in the same bungalow and gave up lovingly restoring it in 2006. On the weekends, Mike often fixes things that have suddenly exploded or just refused to perform the work they were designed to do.  Everything needs to be painted. Sometimes I call our bungalow, the shanty house.  My children often wear their Target clothing and color the magnolia tree with sidewalk chalk, while hacking off branches.

In 2005, I get my hair cut and highlighted once a month. I have a hair cut that reminds me of Jennifer Anniston on Friends. I wear high heels and suits to work, daily.
In 2015, I get my hair cut approximately once a year. I color my own hair to cover the grays. I wear yoga pants and giant sweaters. Sometimes I wear high heels while my toddler naps and strut around talking on the phone to my mother.

In 2005, I get pregnant, twice. First, an accident which ends in a miscarriage and thwarts my plans to go to Kenya for work (probably better, would have stolen and broken glasses from impoverished people). The second pregnancy, a miracle,  which ends in gorgeous Lily in 2006.
In 2015, I have given birth to three children. Lily was a 29 week preemie; Chloe was a 31 week preemie and then Nicholas, the surprise child, is delivered full term (and would have remained in womb until he was 17 years old.) I think of that miscarriage sometimes and remember a psychic once told me I would have four children. I guess that I do, sort of.

In 2005, I find the thought of childhood cancer depressing. Mike attempts to tell me about Alex Scott and Alex's Lemonade Stand. I think he secretly gives a donation. I cannot fathom a child dying from cancer, so I decide to never think about it.
In 2015, my first thought every morning is of childhood cancer. My second thought is about lemonade and Alex Scott. My prayers every night are for children who are dying and for my child, who has survived. I still cannot fathom all of it, but I will never forget it.

In 2005, my goals were to grow my career, find a nanny, travel the world, change the world and live an exciting grown up life.
In 2015, my goals are to grow my career (and nurture my children to find their own life paths), find a nanny (somethings never change), travel the world (with my three children), change the world (specifically, to end childhood cancer and share God's love) and live an exciting, youthful life well into my 90s.

This post was inspired by Mama Kat's Writing Prompt.
Find a photo of yourself taken 10 years ago and display it on your blog along with a current photo. How have you changed since the day that photo was taken?