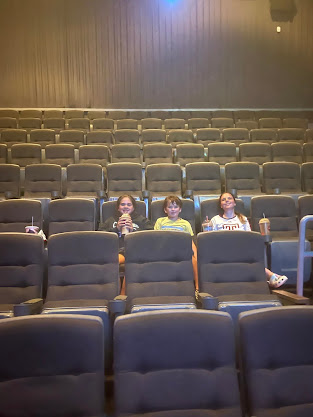 We went to the movies tonight for the first time since January 2020, when I took Nicholas and Chloe to see Sonic the Hedgehog and we sat in the fancy theater seats.

I cried during the previews! It was so good to be back somewhere I loved!

I love going to the movies! It is just the best!

First of all, it is air conditioned. Second of all, you don't really need to clean up after yourself and there is not a trail of popcorn left around your home for the Haddon Township rats (this is apparently a thing! GOD HELP US!) to follow.

And third of all, IT IS THE MOVIES! No matter how bad the film is, you are out in the world, laughing or enduring the movie together.

If you know me and have read along on Yoke, you will already know that my Dad was quite a bit older than my mom and not traditional "Dad" age! He was born in 1920 and remembered going to silent "picture shows." He used to tell me all the stories of sneaking to the movies and the order of the movies (the news clip, the short and then the main event!). And of course when he was a kid it cost like a nickel or something ridiculous.

I started to think about some of my movie memories.  When I was a kid the movie theater in town was "The Barn," literally a barn somehow transformed into a theater. (It was Bucks County, there is a transformed bougee barn on every corner!). I remember seeing "My Blue Heaven" there on a Friday night with friends. seeing "Teenage Mutant Ninja Turtles," with my friend Judy and her little brothers on a day off from school and  going on my first real date with a boy to see "The Fugitive," on a Friday night after I worked my shift at the Thrift Drug. He wore an entire bottle of Drakkar Noir and was very nice and endlessly talked about Billy Joel. He grabbed my hand during the movie--and I remember thinking, I am not really into very nice boys who wear too much cologne and like Billy Joel and hand holding is sweaty.

So that was that. A few months later, I met my husband who never wore cologne (that I noticed), was labeled a troublemaker (because he totally was!) and talked endlessly of Nirvana and Pearl Jam and Sonic Youth and Rage and the Beastie Boys.

He did not have sweaty hands and he was my kind of nice.

I've seen so many movies with Mike. I remember getting in a huge fight during that Demi Moore Stripper movie. I remember vomiting violently on the way home from watching Pride and Prejudice, when I was pregnant with Lily. In fact, we did not have a name picked out and decided the first name we heard in the movie would be the name! The first name in Pride and Prejudice is Lydia, which is Mike's aunt. . .somehow we moved to Lily. This reminds me of another movie memory of going to The Barn to see a movie (i cannot remember which one!) with my friend Amber (who had a little sister named Lily) and her mom. Her mom gave me a sweatshirt (movie theaters are always so cold!), took us to Friendly's (tradition!) and then we had a sleepover. One of the best summer nights, ever!

In Vermont, we went to the movies in St. Albans and it was the smallest theater on earth. In Philly, the movie theater was by the place that had $1 shrimp night. And you knew not to go to the movies on $1 shrimp night because the place got wild. Of course it was Philly, so someone always had a beach ball or some sort of loud drama at the movies.

Mike and I got comped tickets somehow to see the premier of Hype!, a documentary about grunge bands at the Ritz in Old City in 1996.

Lily's favorite movie, "Princess and the Frog," premiered the day she had a routine MRI. We never let the abnormal of cancer get in the way, so that afternoon we went to see it with our good friends Caroline and Maddie. Lily lost her mind when there was a brief period of the movie in monochrome. She was still a bit drugged from the sedation. I'll never forget her screaming: "WHERE DID THE COLORS GO!!" Or the time we saw "Brave" in the theater and Lily and Chloe both begged to leave and go to the car immediately because the bear mother was terrifying.

I remember waiting in line with mom friends to see the opening night of the first "Twilight" movie--we were with tweens in line! I had just had surgery to remove a twisted ovary and questioned my life choices being out and about; but that night was exactly what I needed in that moment!

Once in Salt Lake City, I took Lily (who was 3) and Chloe (who was like 3 months) to the movies to see some 3D fish show. I was exhausted and fell asleep and woke up to Lily telling me the movie was over. She had a great time! And me too, napping!

And the time we took 2 year old Nicholas to see Star Wars and he stood up the whole time, growling at Kylo Ren and shouting at the movie in pure joy.

And the time when my friend Adele was pregnant with her youngest and we went to see Bad Moms in the middle of the name, long after the movie had been released and I slipped in nacho cheese sauce on the floor.

You cannot even get nacho cheese cups anymore at the movies!

And of course, I'll always remember tonight--our triumphant return to the movie theater with the very dramatic "The Boss Baby: Family Business" on the screen and my three kiddos in their seats with their Icees and endless popcorn, laughing together and planning the next few months of movie theater trips through the previews.