My husband was work traveling this week. So I was alone. I mean not really alone. I have three children, a mother in the mother-in-law apartment, a dog (with chronic gas), a cat (wait until you hear about her!) and my work.
So, really I am never alone. But, I was lead parent in charge of it all.
Anyway, the week started out great! We all hit our daily to-do lists. I endured and thrived on video calls while Henry the dog had his loud gassy issue. I wrote a lot of words this week (and not just in Yoke, everywhere else). I even put together some reports. And brainstormed new ideas. And wrote about molecular glue on the same day I wrote about beer. I exercised and meditated daily. I managed to get two kids to well doctor visits during rush hour and back again to pick up a third kid at crew.
I was bad ass.
Then Wednesday came, and if you read Yoke yesterday, that was the day I was trapped in the quicksand after a very long homework tantrum.
Anyway, I survived. Then the morning light of Thursday dawned.
And friends, while the sun was bright, behind it was a dark sinister chaotic force of madness.  First, someone smelled like cat pee and it was not the cat nor the dog nor the litter box.
Then, someone peed in my bed and it was not the cat nor the dog nor the teenagers nor I (although it is a matter of time, friends, before incontinence fueled by 3 prior pregnancies and giving up my will to thrive causes me to pee the bed).
Then, there were several moments of confusion (not by me for once) but around me which caused a lot of screaming and running around in circles. (The screaming and running around in circles was all me.)
I mean everything worked out. I think. I don't really know.
My meals were disrupted in the chaos. I was unable to ever really sit for a meal. I did have two hard boiled eggs that I found in the fridge (hard boiling date unknown. I haven't vomited yet.). Then someone (not me) made box mac and cheese at some point and I ate the cold stuff left over and sticking to the side of the pot with one half of wooden salad tongs (the spoon half. the fork half has been missing for years, but I still have hope for an emotional reunion).
I did stay caffeinated and hydrated, because you KNOW I am simply ADDICTED to HEALTHY HABITS. (#DrinkYourBodyWeightInWaterWine)  I made 4 cups of coffee and drank 5. The fifth cup was one I found on the radiator by the stairs. It was sort of warm, but definitely was not made today. And I had my daily allotment of 7 plain seltzers. Two of those were also wounded soldiers. . .
Apparently, old college habits of drinking things abandoned around an old house are ingrained in my being. You can take the girl out of the frat party, but you cannot take the frat party out of the girl.
Anyway, then Mike came home! I always think I'll surprise him with a very tidy home and a nice outfit and hair that is not being held by a pencil I found behind the radiator while I was sipping my old coffee.
But, alas, this HAS NEVER ONCE HAPPENED IN THE HISTORY OF MIKE AND TRISH. I can do many things, but I cannot pull my shit together to welcome someone home.
This is what he came home to: 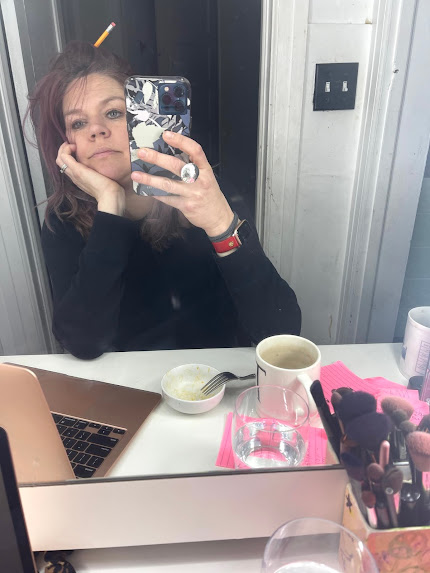 And yes, I am now using my makeup vanity, which is in the bathroom as my desk/lunch table.  I don't know the origins of the bowl and fork, by the way. I may have eaten some more mac and cheese or more likely someone may have left their bowl and fork here because they got distracted while eating in the bathroom. The mug by the fork is the legacy mug from the radiator. And my eyeliner is also legacy, from Wednesday.
Anyway, I am sure it is EXACTLY what he was expecting.
I did manage to pull together a GOURMET and HEALTHY and ORGANIC/NON-GMO feast! It included:
Frozen Pizza (Organic! And two varieties! Cheese! and Pepperoni!)
A salad (comprised of lettuce, tomatoes that tasted like they were coated in windex, black olives from a can that expires tomorrow and Olive Garden salad dressing (not-organic).
Dessert was "on your own" I had 4 pieces of dried fruit that looked like it was dried behind my radiator.
And guess what, Mike is still here! He hasn't left! I think the organic pizza really made him realize how home is where the heart  dysfunction is.
Welcome home, Mike! (I just need you to put sheets on the bed, wash like 17 loads of toxic laundry and write a letter of complaint to the windex/tomato people. . . .)
Posted by Trish Adkins at 6:18 PM