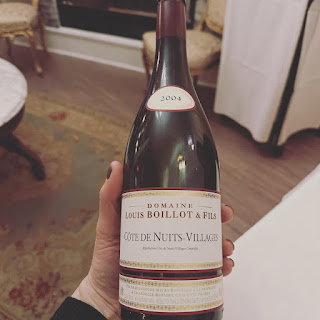 Yesterday, when I was at my favorite wine shop selecting wine for dinner, the man working there told me that it is just so hard to pick a good wine. As he said this, his entire body sort of shrugged downwards and his cardigan, which had appeared fitted, suddenly seemed oversized as he shrunk under the pressure of the wine selection.

And then he said, "It's also hard because our babysitter cancelled and we had dinner plans. Do you like Burgundies?"

And I completely understood why he was so defeated. Parenthood is exhausting.

In the end, he did help me two excellent wines from Burgundy, which I have discovered I much prefer over Bordeaux. But, really I much prefer my bed and my pillow over any wine and anything these days.

Having three kids has always been exhausting, but now that they are all Teens and Tweens, the zone defense strategy we employed previously is no longer sufficient. Our kids are literally everywhere all the time. Today began at sunrise with crew and soccer and one musical practice and then another and a birthday party and a basketball game and a sleepover. I had written in my calendar "Ice skating, maybe?," thinking we'd use the 1.5 hours of downtime to ice skate.

I think I had been drinking wine when I wrote that deranged idea. I had to use that 1.5 hours to order some groceries, power nap and help my son pack for his sleepover.

I know the saying is that the days are long and the time is short. I know they won't always be here and our days of having three kids in the house isn't forever. But, I cannot even imagine what we will do when we have all that time. Will we have hobbies? Will I do crafts? Will I have a social life that includes weekend brunches and day trips? Or will I simply sigh in my oversized cardigan and nap in an effort to catch up from the marathon weekends?

It's all very hard to fathom. For now, I just want my friends in the same boat--especially those of you with more than two (I am so jealous of you guys just rocking the man to man defense parenting strategy)--to know that I think you are awesome and that your kids appreciate you, even when they act quite the opposite. The days are long. The time is short (especially when divided 3 ways). But there are naps, ahead, maybe.