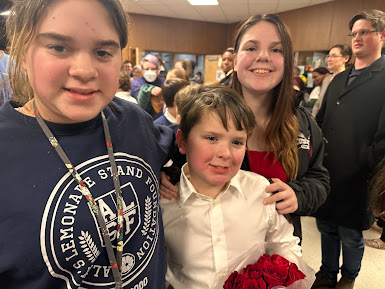 Tonight, as Nicholas ran into his first ever band concert I saw him sort of fly through the air and then land--directly on the concrete in front of the entrance to the auditorium. His trombone and his music (which we had raced back to house to retrieve) went flying. His new dress pants ripped. He definitely had a skinned knee, but he refused to let me look at it.

He had a cry. He had a hug. Then he rubbed my Dad's cuff links that I had placed on his sleeves for good luck, took a deep breath and went inside to do what he had to do.

It was quite a display of a very stiff upper lip.

This was just one of the calamities of the day--earlier I had several odd episodes of forgetting items, getting lost and being stuck on the road as they closed it down lane by lane until there was just a shoulder to drive on. Chloe lost a draft of an essay she wrote--autosave failed and her work disappeared. Lily was called to the principal's office for being late to first period. Mike was stuck on a runway somewhere. Calamity, after calamity.

Somewhere in the midst of all this, serious work was also going on. I interviewed four amazing childhood cancer parents. I use the term interview loosely because they really just talked amongst themselves about all the things I was going to ask them about. Those parents--Liz and Jay and Wendy and Jeff--they are also my friends. It was a bit bizarre to watch them converse--instead of conversing with them. But that's the job. And it gave me some perspective which made my day of calamities just a day.

They know and I know what pain, fear and bad days look like. They look like bad MRIs and kids so sick from treatment that you question whether the cancer or the treatment is worst. This really bad days are stress paralyzing fear and dark hopelessness.

This isn't to minimize anyone's more regular bad day. It is just perspective. Because when each of my kids were crying and so upset for things that are genuinely upsetting, this perspective allowed me to look at them in the eyes and tell them with compassion that everything was okay and all they had to do was just look around.

Today, after all of the things, Nicholas didn't just have me to offer him a hug--he had other wonderful mom friends who were at the ready to tell him everything was okay. Lily had wonderful grown-ups--good friends of ours--to listen to her lament and complain on her high school pains. Chloe had a teacher who assured her it would be okay and a writer mother who has lost so many files to technology errors. I had a friend who called me at the exact right moment and who invited us to dessert after the concert.

Tonight, when I looked around at that dessert table, still a bit overwrought from the day, I realized everything really was okay. Calamities happen; but friendship, family and love those things triumph it all.