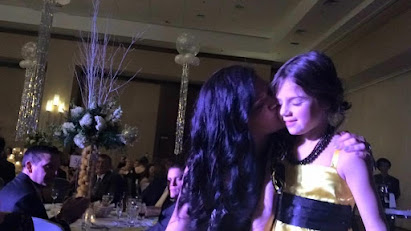 Seven years ago, Lily was 9 years old. We took to the Alex's Lemonade Stand Foundation annual gala, (the Lemon Ball) and she stood with me while I spoke from our seats to a crowd of maybe 1,000 people (it looked like a million). A photographer took a picture of me giving Lily a kiss on the cheek.

I love this photo, because my dark head of hair puts me in the background, while Lily has a light kissing her beautiful, graceful face and she is smiling that smile that has always been hers since the first time she smiled.

It is the smile of a girl full of grace and gratitude.

I worry about Lily all the time--I doubt that is a surprise to anyone who knows her story. She was born to a mother who worried--first about her breathing and her survival; then about her cancer and survival. The latter worries have become forever worries. Sometimes it is driven by rational fears and knowing so much; other times it is simply irrational and knowing too know.

You cannot ever erase what you know, you know.

There are few times when my daughter has ever worried. I know she's been scared; but worry is a different beast that feeds and nurtures fear and doubt. There was one time, at the end of her Freshman season on her high school crew team that she sat in my car in our driveway and told me that her coach at the time wanted to know if she decided what she would do for her sophomore year. He gave her two options: quit or stay on as a manager.

She wouldn't even look at me. She buried her beautiful face and that beautiful smile in her hands--into the darkness of the worry--and sobbed, "What am I going to do mom?"

A few days later this would be forgotten, as Lily experienced a shunt failure and emergency surgery to repair it. After surgery her team showed up. Her coach called her. She had a reprieve from worry.

But then there was an entire Sophomore year of defeat--Lily going to crew practice and showing up and not rowing. Lily begging and pleading for an opportunity--explaining her body and her challenges, while also proving her value and her drive.

She'd have to leave that team--it was an agonizing year and decision--to row again. But in leaving she found a new team.  Lily pulled herself out of the shadow and back into her bright, graceful light and into a place where she is always one of the most grateful people in the room.