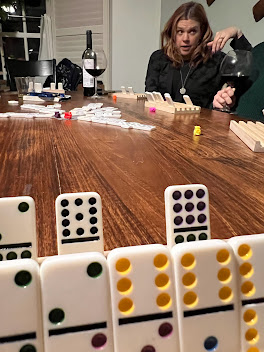 This evening, my husband took a photo of me looking positively deranged. I am, of course, sharing that photo with you, because I am always honest (and difficult). I believe I always look deranged when engaged in a low stakes game with friends: I want to win because it is an option available. Other options available include losing and who wants to lose?

You should also know, I am not competitive at all. I mean, I don't even pay attention to what other people are doing with their lives, which definitely infuriates and baffles several of my life long friends.

Okay, I am lying, I am competitive in settings when it is inappropriate and not necessary to be competitive. Like, when my girls were very early preemies and I had to pump because they were too little for breast or bottle. I used to casually compete with other pumping mothers. They had no idea a horrible, psychotic person was in their midst. I cannot even apologize because I won (the imaginary competition) and there is probably still frozen breast milk from 2009 in our chest freezer.

See, I am deranged!

But, don't blame me; instead blame the game! Tonight we had a game night playing some sort of dominos game called "Mexican Train." Note: the name of this game made me laugh uncontrollably for several reasons I refuse to talk about. I ran several "trains." I won once. BUT I was trying to win the entire time. I don't even fully understand the game. It took everything in me not to demand the rule book.

I don't know why I am like this. But, I do know that I love game night--whether it is real or imaginary.

So bring it on.