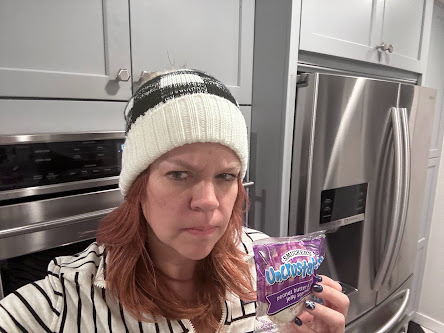 I want everyone to know that today I nearly lost my life because of three Smucker's Frozen Peanut Butter and Grape Jelly sandwiches. I think it is important to note the exact variety of the sandwiches because they nearly lead to my death.

My husband, who is a Yoke devotee, will disagree with my statement that I nearly died. However, he was too busy NOT REALIZING THAT HE WAS SAVING OUR LIVES, so really what does he know.

Here's what happened: it was time for the 57th pick-up, drop-off transportation run for one of the children. We all went because we had big plans to visit the Christmas House nearby, as part of our annual checklist of one thousand (and counting) traditions. We, of course, were told to bring food for the girls, because they eat around the clock like newborns who cluster feed.

But, unlike newborns who have a steady diet of a single food, my girls constantly need to be fed a varied diet. Of course, frozen Smucker's PBJs are truly not a meal, they are basically a dessert and they are not organic and should carry a diabetic warning on the outside. I KNOW.

Anyway, Mike grabbed the sandwiches and then he had an entire defrost method using the car windshield defrosters and placing the sandwiches on the dashboard vents. Everything was fine. It was all very brilliant and for a few minutes I thought about how blessed I was to be married to an Engineer.

Then, in explicably the sandwiches began sliding back and forth. Mike keeps his dashboard waxed or something. It is always shiny and not dull, dusty and suspiciously sticky like mine. Then, the sandwiches fell on the floor beneath him--tossing themselves about. Mike is reaching down and saying strange things like "Oh boy," "Yeah that isn't good." "Alrighty, then." I imagine the sandwiches were lodged under the gas and brake pedals.

It was then that my life flashed before my eyes and I realized that I could die without having my roots touched up. While Mike saved our lives by fishing out the sandwiches, I confirmed my root appointment for Monday, December 19.

Hopefully, I make it until then.

Just so you know, the children ate the sandwiches. Mike warned them they might be still frozen and dangerous. No one chipped a tooth. So friends, I think our luck is on the upswing.