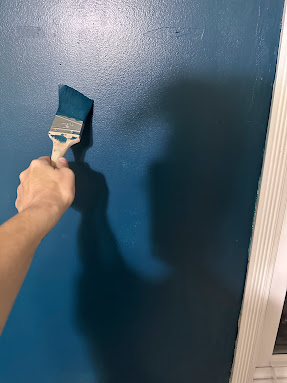 It is Monday, the first Monday after an entire week off from work and school. And there were several situations--a missing child study team lead, a child's doctor's appointment and then a bleeding dog.

The dog is fine. He sustained a minor injury while stealing chicken from the outdoor griddle, which led to a stand off under the griddle (the dog) and a refusal to give up the chicken (my husband). Anyway, the bleeding stopped nearly as quickly as it started, but the trauma remains.

Of course this happened on a Monday; because what other day would this happen except the first Monday after an entire week off.

The children also decided to play Feliz Navidad on repeat at a  very high volume--the sort of volume reserved for rock concerts and nursing home rec rooms. While they listened to their Christmas music, they also fought over the loading of the dishwasher by weilding knives and tongs. I couldn't take it anymore and simply had to leave the room. In the end, they did finish loading the dishwasher, poorly enough, that Mike, physically recovered from the chicken stand-off, but still emotionally traumatized, had to reorganize  the dishwasher.

The good news in all of this is that our dog got a bath.

Anyway, I decided in the midst of this that I'd open a can of paint and paint the walls of our spare bedroom, which happens to be my office, when I choose to sit in an office and not on the Costco recliner (I know! I haven't mentioned in FOREVER!!). I am still painting, just on a break while I type this. I will probably be paiting until dawn.  I am completely ill prepared for painting. I am not even wearing super old clothes and I have ineffective drop cloth, but I just had to do something creative lest I start screaming.

Sometimes, I just have to make something to get through the stress. I just have to channel the energy into something else other than freaking out and stewing in madness. This is why I write and knit and cross stitch and occassionally paint a wall on a Monday after an entire week off. If I don't create something, I will create mental chaos everywhere, like Godzilla or something.

I am painting the walls a deep green blue that is in my favorite rug. The windows will be covered in dark red crushed velvet. I'll repaint my desk a nearly indentical shade of deep green blue. I'll need a new desk chair--I am thinking a golden rod crushed velvet mid-century chair. And there must be light--I'll have to think about that.

Now for now, I'll sign-off, no more words for me tonight paint and those four walls waiting for me to let it all out.