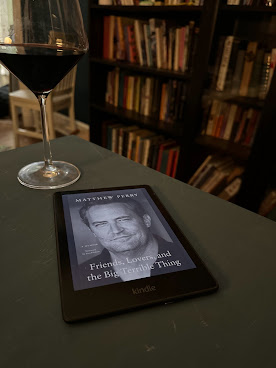 It is actually a train wreck, which I guess is thematic, because Matthew Perry seems to have been involved in several train wreck like situations.

Even though I don't want to do it, I will finish this book because I am not a quitter like his editor's certainly were!

I typically love celebrity memoirs. They are filled with some gossip, some interesting things and a dose of humanity. It is fascinating to peek inside someone else's life (and inappropiate to peek inside someone's windows). But, this book is not something anyone needs to peek at. It's truly that BAD.

The book is not in any discernible chronology. He even confuses the age he was in kindergarten (saying he was 3?). I thought may this was a Canadian thing; but no, Canadian children are not 3 years old when they begin kindergarten, they are also 5 years old. He also seems as if as an 18 month old he understood his father left them and remembers wishing his father would come home and also remembers giving up on that wish as a toddler. But these false memories are the least of the problems. The book just makes very sense and seems like it was written at random on napkins at a bar and then dictated to someone who typed it word for word.

And then they published it without a care in the world.

Besides learning that this book is the Big Terrible Thing, I've also learned that Perry definitely stopped maturing at the age in which he became an alcoholic (14 years old). He shares stories of relationships with women with such utter disrespect.

But, even in bitterness, I cannot wait to see how it all ends. I am sure it will end as it began: in mass chaos. Once I get through it, there are some other books, which I cannot wait to get to this month:

1. Twelve Slays of Christmas (series!) by Jacqueline Frost I love Christmas and I love a mystery and I certain this will deliver on the charm, intrigue and Hallmark-yness!

2. Less is Lost by Andrew Sean Greer I loved the original Less and savored it! I cannot wait to savor the sequel.

3. The Newcomer by Mary Kay Andrews I didn't get this one over the summer and MKA is my GIRL! I am so glad I have it to enjoy as the year winds down.

4. Trouble in Paradise by Elin Hilderbrand This is a oldie and the end of a trilogy Elin wrote. I hate reading the end of things, so I've put it off. But I know it will be wonderful!