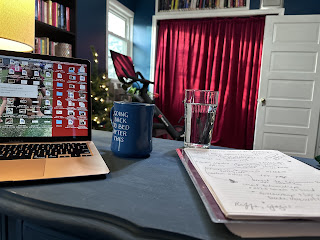 Today, they took away my laptop—just shipped it off to a mysterious location to treat a myriad of acute symptoms that rendered my laptop nearly comatose and me, a hysterical, dysfunctional mess.

Matthew*, at the Apple Store Genius Bar, said “It won’t return the same. Files might be gone. It might be like a brand new machine. At a minimum some parts will be replaced.”

Then he looked at me like I was supposed to be excited about a brand new machine.

And I began sobbing, for the fifth time since I walked in the store.

But, I am getting ahead of myself! I do think good stories start not at the beginning, but in the middle, but then you risk confusion and questions from impatient readers and listeners. So, I’ll start at the beginning!

Yesterday (Tuesday), I went to turn on my laptop for my regular 9:30 am check-in with my boss at Alex’s Lemonade. The time was 9:31, so I was technically early! (Adam knows I use an alternative clock.). My laptop hadn’t been plugged in the night before and was dead, then it was slow to load and I looked at the clock and it was 9:33, so I was now at the risk of being late in 5 minutes.

I decided to do the call on my phone and then saw a message from Adam asking if we needed to meet. The answer to this for me is always NO! But, I try not to be too eager in my joy over a cancelled meeting and played it cool and said, “Nah, bro,** my laptop is slow loading anyway”

Then I sent a picture of the slow loading laptop and we both laughed (virtually) having a good hearty chuckle over my laptop.

Friends, two hours later and it was STILL LOADING.

I had a few other (non-cancelled) calls, so I wasn’t fully understanding what was happening. I tried to restart it. I accidentally unplugged it 7 times when the cord became entangled in my chair. Each of those 7 times, the laptop shut off immediately. It was like old time corded electric desktops. And then I had to start the restart process again. At one point, I made it far enough that I was able to get past the log in screen and then there was a weird error with Adobe Creative Cloud (I DON’T EVEN USE THIS!) and I was able to install the thing I’ve never seen before. And then there was a suggestion that I upgrade my laptop operating system, so I started that and it estimated it would take 12 hours.

Then, I purposely unplugged it for the 8th time because I was very angry at my laptop’s betrayal. SERIOUSLY HOW COULD YOU?

Alright, so then I immediately made an appointment at the Apple Store Genius Bar. However I had 24 hours and 24 deadlines and I am a writer and my laptop is legit my livelihood—my income and my mental health and my art! My WRITING! I had no idea when I last backed up anything or whatnot. And obviously I have no real organization to my files because I am a CREATIVE!

Anyway, I briefly had hope that my iPad could fill in for 24 hours; but then I discovered my children had changed the passcode and none of them knew what they changed it to and in turn, they began fighting amongst themselves and apologizing to me for each other. So the iPad became locked, as if I had stolen it. The only way to unlock it was to hook it up to my laptop, which was busy betraying my trust.

I spent the rest of the day: sobbing, pressing restart on my laptop, sobbing, writing a blog on my iPhone, blaming my family and wrestling with fake Christmas trees. The last task was to distract me from the laptop, but that ended in a more-than-minor injury to my right side thanks to an ill fitting Christmas stand, polished floors and my socks. I bled, friends, I BLED.

This morning, I woke up and it seemed my laptop had installed the update, but it was now LYING TO ME because as soon as I clicked “Accept the Terms of the Update” or whatever, it froze again and the fan began making a constant white noise sound that was like the ocean during a hurricane.

So I sobbed more.

Friends and colleagues offered unhelpful advice (unplug it! Update it! Upgrade things! Throw it down the stairs! Give it a minute!). So I sobbed more. Then, it was time for my Genius Bar appointment and I almost could not walk in! I was so nervous, as if I was going to a doctor’s appointment to find out if my tests revealed I had a rare, incurable disease or just gas.

But, I rallied! I sobbed upon entry, so I was assigned Matthew, who apparently helps the emotional. Matthew distracted me by asking me about my Christmas nail polish, my handbag and what I ate for lunch. He was very skilled at deflection and is definitely a psychiatric nurse, in addition to his Apple Store job. He fixed the laptop and chuckled about my children. He showed me shortcuts on my cell phone and where I could find my files on my Mac. He assured me that it seemed I had everything. He fixed me up a with a keyboard with a trackpad, so I could write my missives. And then, he made me sign a permission slip to treat my laptop and transplant new parts, as needed.

It was very emotional. I even had to turn off “Find My” tracking so they could track it. It was like giving away a useful family member.

I should get my laptop back, brand-new, missing things, by next week. For now, I am back running my Empire via iPad, which seemed to miss me during my absence.

*Name changed to protect the identity of the genius