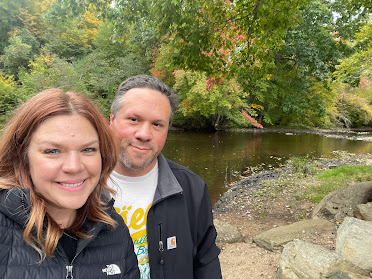 Last night, Mike and I stayed up way too late and two things happened that rarely ever happen:

1. He beat me at Uno-TWICE. (this is actually earth shattering. I win all games! He definitely cheated.)

The last item is not out of the ordinary for Mike and Trish, in general. But, with three kids, separate careers and all the things we have to do, talking is often the last thing we get to do. And by talking I don't mean talking to one another. We talk all the time! What I mean is real genuine late night, slumber party level chatting about everything under the sun from serious things to funny things to philosophical things to things that have nothing to do with anything to random things to deep, emotional things, like how proud we are of our three children who are somehow turning into really good human beings.

In recent times, this real talk has most often happened via phone when Mike is traveling and I away and we catch up late night after everyone is in bed and Mike's finished obligations for the day in another time zone. I love those talks, too. They remind me of the early days of our relationship when I'd hope the cordless phone battery held out and hiss or growl at my parents if they even considered asking me for phone time to make calls of their own. Young Mike and Trish talked about everything--soups to nuts--Cobain to Vedder--Vans to Nikes--Stories from the times before we knew each to stories from the short hours that our different class schedules separated us.

I love talking to Mike. I don't think there is anyone I would rather talk to.

So, last night, in the deep woods of Connecticut in our very boujee cabin at this very sweet and quaint campground, after our youngest two children fell asleep in their bunk beds, we talked and talked. There was no laundry to do nor were their schedules to coordinate or pets to feed or things to plan. There was just us.

And that friends is really all I've ever need.

Tonight, when we were having dinner by the fire, Chloe remarked that Mike and I were starting to look old (She is the BEST that CHLOE. Apparently counting on her siblings being more horrible, so she will still inherit the fortune made up of laundry and Fiestaware.). Later, Mike made a comment about someday Nick's kids calling him Papa. And I thought:

I've gotten to talk and talk to this man since we were teenagers. We've talked our way through college and our twenties and our thirties and NICUs and PICUs and operating rooms and funerals and weddings and houses and movies and concerts and someday, we will talk our way through our old age and perhaps a Botox appointment (thanks CHLOE!) and grandparenting and well, there is no one I'd rather talk to through it all.