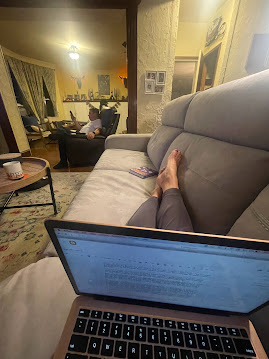 Our cat Rosie got the mouse.

By got, I mean murdered it.

And guess where she left it?

By the altar of the Costco Recliner Couch, of course.

She really is disturbingly brilliant.

While I was horrified and refused to look at the dead mouse (Nicholas saw it and verified it was not breathing by holding the mirror of Dior blush up to it’s partially decapitated mouse head.), I am impressed that Rosie is aware that my home base is the Costco Recliner Couch. She is definitely the smartest cat in the world.

As soon as Nicholas told me and verifed it's death, I climbed off the couch by leaping over the side and ran upstairs to call Mike, who was doing the last dance run, and let him know there was a body to remove! (It's very thematic, since he was burying bodies on Saturday for the Halloween party!).

And you know I love a good theme!

Rosie spent the entire day staring in a very aggressive, yet haughty way at the closet in my office. As a result, I had to work downstairs because that haughty look means she's found something!  Then she spent some time staring in that bored killer way at Nick’s bin of Hot Wheels. At one point, Mike saw her sleeping at the door of the girls room.  I think the hunt is like an epic Safari vacation to her. She plays hard, but also relaxes.

While I was on a very professional call, giving an update on a project I’ve been working on for the entire year, there was a commotion upstairs. My first thought was the house was haunted; I did just finish my Icelandic ghost story and those Icelandic ghosts were very noisy. Then I remembered that I do not live in Iceland and Rosie was upstairs hunting! But, then when I made Mike investigate (I could not I was being professional), he found no evidence of anything, so I just assumed maybe it was ghost and put a note in my calendar to research this while on a conference call tomorrow.

Anyway, all was quiet and then I was sitting on the recliner couch, working and trying to discern where the weird smell was coming from (which is still here so definitely not the dead mouse, which isn't still here) and Nicholas was playing is trombone and then shouted, "MOM THE MOUSE IS DEAD AND IT IS RIGHT THERE!"

And you know the rest of the story.

If you need me, I will be where I always am these Fall evenings, on my Costco Recliner Couch. (I'll let you know if I fix the smell situation, since I know you are all wondering!).