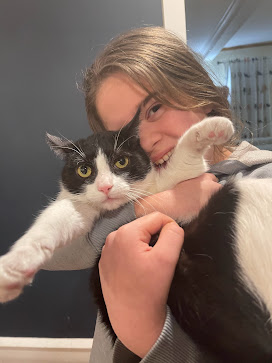 There is a mouse (or several! definitely a thousand!) living in my office. I discovered this today; but on Monday, I thought I heard something in the closet. Then today, I saw evidence! Little bite marks and some mice droppings!

DROPPINGS! The shame! RUN ME OUT OF TOWN!

I know it will most likely be fine. I mean maybe. We live in an old house. These things happen. The mice in Cinderella were helpful and made dresses. The mouse (or several! definitely a thousand!) in my office doesn't know I wrote about testing cancer drugs on mice, so they cannot be retaliating against me. EVERYTHING IS OKAY.

I spent some time today chasing and catching my cat and putting her in the office.  She did not want to be in there. But then, once she realized it was a hunting activity, she seemed pleased! I caught her staring at the closet in a stalk position!

She did not kill anything though.

I, however, spent time killing my dreams of ever sleeping again by researching "HOW TO GET RID OF A MUTANT MOUSE IN YOUR OFFICE." I learned nothing except you have to kill them and surround your home with clove oil soaked cotton balls, which confirms what I suspected! Mice are vampires.

The internet, up until the posting of this blog, said that mice were not vampires. BUT NOW, well, NOW the world (at least 39 members of the world!) will know the truth.

Anyway I really cannot believe this is happening. Unlike my mother, I do not have an "open door" policy. I don't even really like animals or people. No one should come here. I am not friendly. I will not use humane traps if it comes to it. I am rooting for my cat to bloody the mouse (or several! definitely a thousand!). I also suggested to our cleaners that they try to vaccuum up any "small animals" they find.

For the record: they refused. BUT maybe they vaccumed the mouse (or several! definitely a thousand) up accidentally. MAYBE this is all a dream. Maybe it was brown rice sprinkled on the floor. Maybe I heard a ghost! Maybe the cat was stalking a poltergiest.

NOT A VAMPIRE MOUSE CARRYING DISEASES I'VE NEVER EVER HEARD OF BUT NOW DEFINITELY HAVE.

A few other vampire mouse situations: our bedroom door randomly opened itself last night! I bet the mouse (or several, stacked on each other as if in the Surivor wall climbing challenge) opened it. And my touch light on my bedside table has been known to turn on at random and this is because the vampire mouse needs light to read.

I am beside myself.

Anyway, the good news, as always is that I moved my office to my Costco recliner couch. God bless Costco.