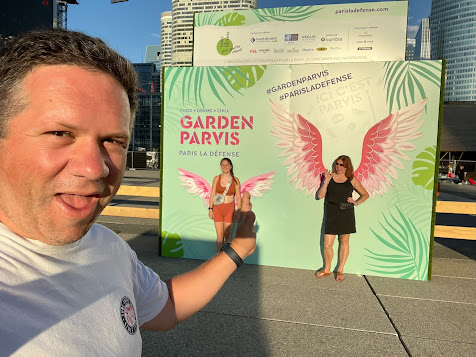 I have celebrated 28 birthdays with Mike. It's a bit unbelievable to write that and even more unbelievable: I am not entirely sure what to write for his birthday blog.

I often wonder if when Mike first pursued me if he realized that he was signing up for a life of chaos and mess. I always knew I'd be chaotic and messy. Today, on his birthday, there was mass chaos with a secret furniture delivery (a recliner for him!) and sushi and pandemonium. Mike questioned why we were demanding him to get out of the house; but then simply left, realizing whatever it was would be fine.

Mike is not chaotic or messy. I mean he often leaves his socks and pants in unusual places and sometimes a glass on the floor. But, that's about it. He keeps his life pretty simple and would never dream of scheduling 4 things at once.

Yet, he mostly seems to not mind when I randomly decide to start a new massive project or demand he begin a large scale project on a whim.

He not only tolerates my mess; he seems to sometimes enjoy it.

I think this is my favorite thing about him--this ability and willingness to get messy even though it is the total opposite everything that he seems to enjoy (minimal clutter, organized schedules, budgets, engineered things, work plans, quiet time). He gets messy for this family all the time and is never daunted by anything. He was just 15 years old when he met my brother and treated David like the human being my brother was.

Other boys, well there were not a lot of them, but there were enough through my childhood--not one of them ever stopped to give my brother a second thought. David was too messy-too abnormal.

But, Mike, well, he just saw him. Mike moved to Vermont after we graduated Temple. I had a job--the kick off of my career. Mike had nothing but two interviews and a job at Smuggler's Notch working the lifts. Then he left Vermont when the grant-funding for my job ended and my Dad had heart surgery and I wanted to come home. Well, actually I left. He stayed and dealt with the mess of breaking a lease while searching for a new job down here; joining me when he could.

He's held me through horrible messes and sorrow--literally holding me up when my legs collapsed and my screams took my breath away. He drove right into the mess of having a preemie and a sick wife (twice!). He learned everything he could about pumping so our daughters could have breast milk in the NICU--organizing pumped milk and buying a chest freezer to store it. These are not little things--these are messy, chaotic, out of the ordinary things that he drove right into without a thought.

While I took Lily to all her PT and OT appointments during the week in those years after cancer; Mike was the weekend therapist--taking her and her walker to walk everywhere--the more crowded the better, the more "normal" the better. I always remind Lily of this--in case she forgets that her steps were fueled by a father who believed in her. And now, everytime she is out on that water rowing, I hope she remembers the father who demanded a crew coach give her a chance and then when they wouldn't, refused to stop believing in her and believing someone would give her a chance to row.

Mike is the sort of guy who stops for every car accident, who is happy to give anyone who is cold his coat and who will step in and try to fix anything that seems broken (even if we are running late to something very important.). He doesn't mind rolling up his sleeves and helping, ever.

For me, he dives right into whatever madness I have cooked up. He reads this mess of a blog everyday. He's organized my closet by color and season (which lasted like a week and then I could not keep up!). He organizes the utensil drawer and gives me instant peace that I did not know was missing. He agrees to my ridiculous weekends away and even enjoys things like "The Boxcar Children" museum in small town Connecticut. He deals with my mother and her apartment. He never takes down the 150 post-it notes hanging in my office with insanity scribbled on them. And he never gets angry when I forget something very important like a schedule change or an important document.

And, he doesn't fully seem to think I am a mess; which might be the biggest compliment of all.

He's the best, even though I am just okay. And that's exactly how you should feel about the person you love with your whole being.

Happy Birthday to the man who married a mess and loves a mess and always rolls up his sleeves to help.