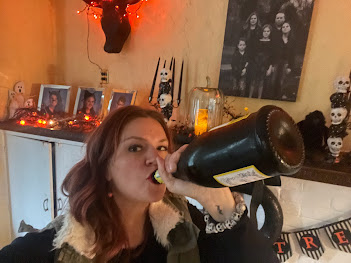 Well, friends, several weeks ago I mentioned how I did not like inflatable costumes. However, my son had to be an inflatable T-rex. It was all so funny--him dancing around all inflated with his best friend who was a chicken.

And then it was time to Trick or Treat and that effin' thing stopped inflating. It gave small glimmers of inflation hope by blowing air into the suit for a moment and then stopping. If you jiggled it around and pressed really hard it would stay on; until you jiggled it the wrong way and then it would stop.

Never again friends! I should aways trust my instincts!!

So I did what any mother would do on Halloween moments before Trick or Treating when a costume is broken: I had a tantrum and drank directly out of the bottle of Prosecco.

Earlier, my girls were, to quote my friend Lori, "in a way," and having domestic disputes with one another. Two of my middle's friends were here and I am not sure if they were entertained or horrified. But, they were definitely not surprised. To know an Adkins is to know there will be disputes, this is why we furnished the wrap around porch, so company could wait it out until a resolution.

You are welcome, guests!

Anyway, after the domestics and the broken costumes, I was so impressed by my son's creative and positive attitude and decision to become Bryce Harper. He grabbed his fancy "for display only" Louisville Slugger from his wall, dug out baseball pants from when he played baseball two years ago (good thing he's only gotten taller, not wider), his soccer socks, his Bryce Harper jersey (which he was already wearing, God Bless him) and allowed me to slap a NARS eye shadow beard on that cute face of his.

I personally think our new bedtime routine of very pious prayers made this attitude possible; but maybe it was the prospect of nearly unlimited free candy.

Either way, everything worked out! We Trick or Treated with the neighbors. The girls ran off with Chloe's friends in our strange little neighborhood. We walked, we gossiped and we got Fireball shot. I was shamed by a grown woman for my small sip of the shot. Sara: I WANT YOU TO KNOW I AM A GROWN WOMAN AND YOU CANNOT SHAME ME.

Also, I just finished my Fireball, so take that!

We picked up an additional member to our Eldridge Crew--Meg and her family. Then had my Halloween Nacho buffet and of course, another neighbor's Halloween Birthday makeshift cake. It was all so lovely.

I also discovered that you can remove shredded cheese from your Costco recliner couch using a lint roller. As the kids say, you can follow me for more life tips.