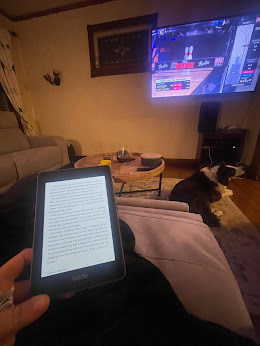 At one point this evening, I looked up and I was entirely alone except for bowling on the television. I did not even know they televised bowling. And I am not trying to throw any shade at the sport; I still need the bumpers up when I bowl, but still, it does not seem like something to watch on TV. I could not change the channel for three reasons:

1. I was reclined on my Costco couch.

3. I don't know how to work the television remote because Mike changes how it operates on a rolling basis to torture me.

Anyway, I am getting distracted from my story of being alone.

So, friends, I was alone. Some time earlier the Phillies won, even I screamed as the last ball was caught and the third out was had. We watched what seemed like hours of interviews and champagne celebrations and the Phillies players repeatedly singing "Dancing on my Own." The children gradually disappeared to do what I assume they do in their rooms: SnapChat classmates they would never speak to in person pictures of lightbulbs and blank walls (Chloe), make candy from candy following a YouTube video (Nicholas) and to shop for $300 coats (Lily). Mike stood up and I said, "Well I guess we should make dinner." And he said "in a minute." And since I was not about to make dinner on my own, I just turned to my book, which is that very fabulous Icelandic ghost story I mentioned called "I Remember You" by Yrsa Sigurdardottir.

I got lost in spook of it all and suddenly, it was 8pm. My family was gone, no dinner was made and it was like I was dancing on my own (I cannot stop singing this song) with bowling and the dog.

This happens a lot in this house. I mean the bowling part is new, but the ghosting family is not. If I don't specifically interact with my family they tend to wander off. I often wonder if I somehow missed something important that they said. This is entirely possible. My family claims I don't listen to them, which is funny because I KNOW THEY NEVER LISTEN TO ME EVER. This is evidenced by how often they ask me what is for dinner, when I've told them 17 times. Tonight, I vaguely remember a child asking if they could go upstairs. Maybe? I don't know there are so many of them and one of me.

Anyway, I needed them to appear to help with dinner, so I bellowed for them, like I tend to, and they appeared angry, unhelpful and moaning. This reminds me of angry ghosts, which is exactly why you should NOT have seances or like summon the dead with a Ouji board. Anyone who has ghosted (literally or figuratively) on their family will not appear fit to converse or help. My children are angrier than poltergeists when I interrupt them after they've ghosted from family life. They were very unhappy with having to fetch items and even went out to find their missing father and complain.

Note: my husband was in the garage and came back in to complain about the children complaining. He was like low level angry. Not poltergiest level.

According to "I Remember You," that Icelandic ghost story I am reading, the ghosts actually get angrier overtime. Sometimes they get so angry they like push you on top of gardening shears to kill you or maybe throw bricks at your head or shove you down a flight of stairs.

When I take this info and apply it to parenting my children, I realize I cannot leave them languishing for too long because they get angrier! I am going to begin interrupting their free time every 15 minutes just to keep them even and have them accomplish more tasks that I don't want to do. I think I could have my closet cleaned out by the end of the week using my new parenting system!

I feel this is the best non-parenting advice I've uncovered recently in a fictional piece of literature (which was definitely not written to inspire parents). I cannot wait to Tweet Yrsa and let her know how she is helping parents and scaring people!