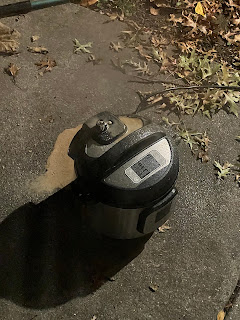 Friends, today the Adkins Sisters killed it. Chloe rocked field hockey and her team earned the "Honey Badger" (I KNOW WHAT KIND OF NAME IS THIS?) league championship for their age division. Lily rowed in the Head of the Schuylkill and her boat placed!

I admire them both for their dedication because these wins did not happen due to their natural athleticism. These wins were hard fought, with hours and hours of practice, tears and grit and a certain Carrington-Adkins combination of being both graceful and kind as well as defiant and shark like.

No one tells either of my daughters they cannot do something. I should know. I tell them all the time not to do things and they literally badger (and not in the honey way!) me into submission.

They are terrifying, truly.

I am exhausted and struggling to dig into my Carrington qualities of being able to solve any problem, defy the reality of needing sleep and also sniff out a phony-baloney, while being kind and shark-like.

I don't even think anything I just wrote makes any sense; but in my defense, I am going on 4 hours of sleep. We were up at 5 am for the regatta; then raced back for field hockey/soccer and then God Bless the amazing Beth who got Lily home from the river (I would not have been able to make it without napping on the way), so we could all go to the 5pm field hockey game, which was amazing and ended in medals and trophies, so really totally worth the exhaustion and delusion.

Days like this often leave me feeling impressed that one can accomplish so much in a day, including feeding your family without the support of The Pour House.  I made beef stew in the pressure cooker. Of course, there was a slight problem with releasing the pressure and I had to bring the whole pressure cooker unit outside to let it explode beef gravy and juice like an erupting midwestern volcano. This was after it erupted in the kitchen and I had to climb up on the kitchen counter to clean the ceiling.

Don't you love this phrase "Erupting Midwestern Volcano?" I just made it up. I have no idea what it means but I have a vision of there being a lot of grass fed beef in the midwest and not so many volcanos. I also think everyone has an Instant Pot there. Either way, this is now the name of tonight's Yoke!

See I told you I was delusional and exhaustion.

Tonight, after the 12 hours of sports,  I had to sew and repair a Halloween costume, dig through mountains of laundry in search of a mythological "Hocus Pocus" sweatshirt, which I convinced hocus pocused itself away, wash a corn costume, change the batteries of a dinosaur costume, change the batteries of several Halloween features in the home and read an entire book to get my son to fall asleep. I think I feel asleep briefly, too, but it was not good sleep because of the scary parts in the Mickey Mouse "The Haunted House" book which kept me guessing whether there was a ghost or a bank robber!

Spoiler alert: It was a bank robber! Who tied Mickey and Donald up. Of course, non-verbal and naked Pluto saved the day so everything is FINE!

I have no idea what I am rambling on about now.

It's like I ran several marathons in one day and now I am being asked to get limited sleep and run another tomorrow and I cannot say no, because tomorrow is Halloween and that is definitely on the best days of the year.  I have to do professional work and also clean the porch, prepare the traditional Halloween Nacho buffet and of course, attend Nick's Halloween parade at school.

I also have to go to the liquor store to make a Hocus Pocus cocktail, to ensure that the first day of November is as exhausting as the last day of October.

So with that, I am going to close down Yoke, take the corn costume out of the washer and pretend to go to sleep.