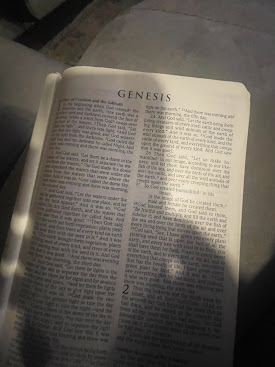 I just spent both too much and too little time Googling whether Day 1 of the Creation Story is Sunday or Monday. I found several complicated explanations that mentioned the Georgian calendar. Then I read something that referenced the International Date Line and I realized that I don't care what the internet believes; because the first day of the week is always a freaking Monday.

In the very beginning of Genesis, the earth is described as a "formless void," which is really the best description I've ever read of Monday. Is it truly the formless void of the week and then, inexplicability, you are called to create some light just so you can through your Monday. Which, of course, is what God did on the first day: He created light and then the darkness, which is always there, came back when the light was like tired or whatever and all the molecules of the universe definitely rejoiced because they could finally go to bed.

This is how I always feel about Monday. No matter how organized, motivated and driven I am, this day is a freaking void of nothingness. My Monday included some time at the NJ Motor Vehicle Commission, which was short, thankfully, but nonetheless repulsive, as one would expect. Then I was bizarrely exhausted, but still had to do my work and really, in the end, I am apocalyptically certain, the work I did was not nearly enough to make Tuesday any less difficult than Monday.

I don't know why Monday always feels like such a void. I go to bed pumped up to have a wonderful week! I even prepare my to-do list! I wake and suddenly everything hurts, the light is too bright, everyone is too loud and my to-do seems like it was written by an energetic, delusional stranger.

So, I live and work in the Monday void and eat Gold Fish Crackers and ramen noodles, neither of which are nutritious but both of which contain the recommended sodium intake for a month.

And Monday isn't always all-bad. There were some lovely things today like a couple good chats with friends and some reliving of Lily's amazing day and celebrating Chloe's amazing day today at her 8th grade field hockey game (Go Hawks!) and reading a book with Nicholas all about his brain.

But, then there were bizarrely trying things like arguments and too long discussions about emptying the dishwasher and Algebra and bootie shorts.

God did not seem to have to argue with Light and the Dark and the Dome and the Sky and the Waters! He was really able to get stuff done on His Monday. Of course, He is God, so like I cannot compare myself, lest I risk ultimate failure. But, I can say PRAISE GOD for the darkness and the end of the formless void of Monday, with an eye towards Tuesday, when I am just expected to separate Sky from Water, seems entirely possible with a good night sleep and a positive attitude.