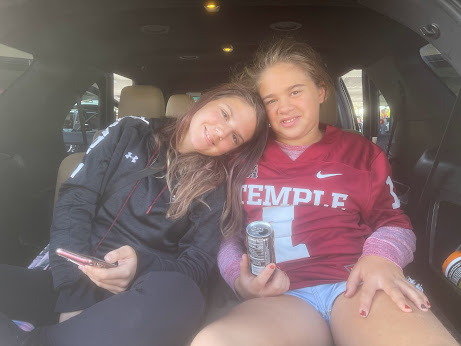 When my teenager daughters get along, I feel like I am watching a ridiculous sitcom. Tonight, after a shared dance class they are taking together (under duress), they came bounding in the car chatting away and giggling. Then at home, they began discussing math and the distributive property over homemade peach cobbler.

(Yes, for some reason related to mental illness and my own dysfunction, I made a homemade peach cobbler from the remaining peaches on our peach tree. This is not a regular thing. And Mike will be cleaning the kitchen for at least 2 hours. )

I suggested that they discuss hot boys; which they did for a brief second; and then by some unspoken agreement returned to discussing math.

Watching sisters is like watching two exotic creatures. I never had the sisterhood like they have. I have a sister, but she's not functional. And I have sorority sisters, whom I adore. And I have friends from preschool all the way up to now who show me sisterhood and support that is like oxygen.

But, I don't have a Lily to my Chloe or a Chloe to my Lily. Watching them and witnessing their relationship unfold is fascinating to me. There are days when they straight up hate each other. The words that come out of their mouths are words that would make a jail full of convicted felons blush.

But, then, they return to one another as if none of that ever happened. It isn't that they don't hold grudges--they both love a grudge, it is just that they are very patient and can save their grudge for when it can really sting the other one.

They steal each others clothes and then they happily lend their clothes to one another. They complain about sharing a room and then I hear them laughing and gossiping long after they should be asleep. They demand time away with their own friends and then I see them all together--the sisters and their friends. They call each other horrible things and then they turn on anyone who does the same to their sister.

And when I get so angry with the fighting, they look at me and say, "Mommy, we love each other. It's okay."

Those girls of mine are thick as thieves, absolutely maddening and just so perfectly wonderful.