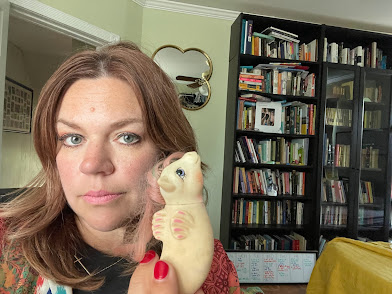 After my brother died, there were not a lot of signs. By signs, I mean messages from beyond, I guess. As I write this, I feel like I sound like an insane old woman who has a crystal ball and is offering prophesies about the end of days and the dead and what lives beyond in the other realm, which is heaven or life everlasting.

And maybe I am. But, I know there were signs when my Dad died, but my brother offered nothing.

Which made me chuckle a bit since he was non-verbal as a human being; maybe he'd be non-verbal as a spirit, too. I mean GOD (literally) only knows how it all works after we die.

There were so many obvious ones with my Dad--the turning off of the hot water heater, the light up of an electric candle on a birthday cake costume on the eve of my son's first birthday, the unplugging of the phone and his paint brush that was dedicated and only to be used for the application of varnish or a clear coat, popping up at a variety of times when I needed clarity on something.

I've asked my brother for signs and I never get any. So maybe the stuff with my Dad was just me projecting and thinking about him. And if that is true, that is still a sign. It is a sign that the love my father and I shared did not die with him; but it remains here.

Maybe all these signs are not from the dead; but they are from the love left behind--like love becoming alive and moving in mysterious ways we can never understand.

Anyway, I'd nearly given up on any sign from my brother, but then two things happened this week.

First, we went to Pearl Jam on the eve of the day he choked. (If you are new around here: my brother choked on a hot dog, went into cardiac arrest, his caregiver tried to save him, but it all ended after a horrible week in the ICU with David on the operating table and two men getting new kidneys, amongst other things.). Pearl Jam played Given to Fly. I have no idea what Eddie Vedder intended the song to be about when he wrote it. At the show on Wednesday, Eddie rambled on about Dr. J and sort of said it was about him. I turned to Mike and told him that Eddie was wrong, it was about David Carrington.

I mean, I am always right, right?

It occurred to me that when I saw Pearl Jam in London, on the eve of my brother's birthday, they also played Given to Fly. And well, if my brother was going to come to me, he would come in music. David loved music. He understood it in the way the cells of our body do. Sometimes, I close my eyes like he would and I just feel the music moving my cells all around and transforming me.

So, yeah, Given to Fly was from my brother--one way or another.

The second sign happened this morning. Chloe came down and handed me a My Little Pony Seahorse, circa 1985. This was my favorite toy--I remember when I received it, for my 8th birthday (which was held at McDonalds). One day later, we left for our two weeks in Wildwood Crest. I brought my seahorse to the beach and in the ocean and fishing out in the deep sea. When our day to return home came, she was missing.

I was hysterical. We searched our house top to bottom. I screamed and screamed. We emptied out the trash.

I blamed my brother. My parents told me to stop blaming him. But he was smiling the entire time--almost enjoying the whole scene. My seahorse was gone.

We gave up. My dad pulled out his suitcase to pack and there, right inside, was my Seahorse.

Right where my little brother, who was laughing,  had hidden it.

I told this story in his eulogy.

I had seen my toy in years and years. I have no idea how it survived for so long to end up here. But here she is--she was right where my brother left her, for my daughter (who has his eyes) to find during one of the hardest weeks of the year.

When Chloe handed it to me, she said: "I think you liked this toy, right?"