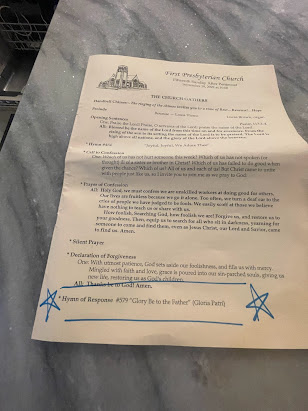 (Literally, since it happened at church and He seems pretty present at church.)

I grew up with the Gloria Patri, Doxology and Apostles Creed memorized. I taught them to my children. When I sing and say them with my church, I feel centered within and held by that community without, which all adds up to feeling closer to God.

(I also get to silently judge those who need read the words and know they are not lifelong Presbyterians and then atone for that judgement the next week and celebrate my forgiveness with the Gloria Patri.)

Friends, sometimes, the familiar things are the very things we need to feel like ourselves.

And this morning, I felt more like a Presbyterian than ever before.

Some of the change was probably related to COVID. BUT the change began long before church was virtual and communion was ginger ale and Wheat Thins in my living room.

I don't fully recall why we stopped saying and singing these things; I vaguely remember a church meeting when someone said we should "change it up" (as if we were on one of those makeover shows) and someone else said "change is good" (I mean not always) and someone else said "it will keep the young people coming" (am I NOT YOUNG?). At the time, I thought it was just talk and that maybe it was temporary.

But, alas, we've been NOT singing or saying those things for an eternity (relatively speaking).

The Doxology was briefly replaced with something that I did not enjoy singing (it was not catchy and allowed for extensive showboating by the choir). Then both songs and the regular creed seemed to disappear and I don't even know how I was professing my faith or celebrating my forgiveness or sealing in the offerings to help the church do God's work. It was like I blacked out and completely disengaged from worship.

It took four pastors to return to NORMAL (one retired, one was temporary, two were new) and I am so glad that their departures and arrivals have ushered in a change back to the familiar way. It is probably not familiar for some (don't worry! I'll judge you but you'll never know.) but they will get there.