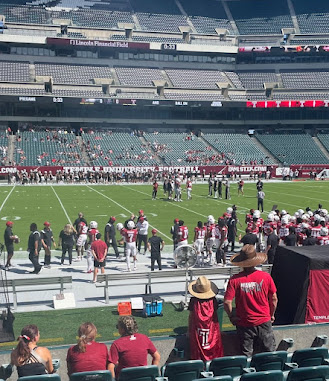 Friends, I am tired in a narcolyptic way. In fact, I started writing this almost two hours ago and fell asleep in my bar mitzah dress while writing.

I think the first week of back to school (sports, reality) have taken a toll on me. We had a lovely dinner with friends last night; then a full morning of soccer and rowing and errands and then, of course, the bar mitzah I mentioned (Mazel Tov Sam!) with a Temple Football game inbetween.

I fell asleep twice at the football game, not because the game was boring, but because I was just so tired. My children talked in my ear the entire time about things they wanted me to buy them; so I don't think they noticed that I was actually sleeping. I did not fall asleep at all at the bar mitzah because that would be super weird and it was a lovely, meaningful event!

I do feel a little ashamed about the football game naps, though.

Mike found a tweet from another fan and in the photo included, I believe I am mid nap.

Lily was not quite 6 months old when we took her to her very first Temple Football game. It was an away game in Syracuse, New York. She had the cutest little owl beanie cap and a "Future Owl" onesie. Chloe was closer to 9 months old and she wore Chloe's hand-me-down owl attire. Nicholas was 10 months old when he first tailgated and cheered for the Owls.

Of course, Mike and I have been going to Temple Football games since 1995.

It's our tradition-tailgating with Mike's amazing turf rug in the parking lot of the Linc with breakfast pizzas or grilled sandwiches made from Thanksgiving leftovers. Our seats, for most of the time we've been season ticket holders are row 1--right around the 40 yard line. Some of the team staff, who have survived many coaching changes, have watched our kids grow up.

I remember once, Mike told me that someday we'd have to five up our tickets because our kids wouldn't want to go or be able to go. However, somehow, that hasn't happened. Sure, we've missed a game here or there or half our crew attended while the other half had some other obigation. But, even our teenagers who increasingly have lives separate from us, make Temple football a priority. No one complains about game day (except Mike, who would like me to get ready more quickly, even though he'd ever say this out loud).

Everyone gathers their cherry and white gear. We high five and we shout at the refs and we celebrate and we all "T for U" the heck out of the Temple fight song. We plan our next tailgate. We never really talk about whether Temple wins or loses because well it just doesn't matter, because we are together for it all (and for the football game naps, when required).