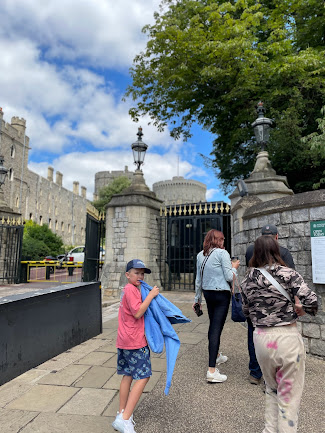 I've decided to utilize one of the most underutilized resources around: my emergency contacts.

My two emergency contacts--my dear friend Kate and my dear mother--will have to take all calls from the school going forward. My mother is not on the WWW, so she'll be surprised and Kate is a regular reader, so she can consider herself notified! (Also, Kate, will you be my emergency contact? Thanks!)

You may be wondering why I've decided to defer all calls to others; well friends, today was a doozy.

I started my day with the darkness at 6 am, followed by the scream of the 16 year old when I woke her up. I always say, "Hey Lily!" and she will either say, "I've been up for hours, what do you want?" or simply scream. Anyway, then I grabbed my coffee and began my required correspondence (I am my children's administrative assistant) to the school about changes in pick up routine, dance scheduling and a situation involving field hockey uniform sizing. At this point, I realized the middle child also need to get up for morning music and in a bizarre twist, she woke up, happy!

I should have known this both a bad omen and a blessing God gave me as an apology for what was to come.

The field hockey uniform sizing situation became a political protest, of sorts, and while, it resolved in a way that is mostly satisfactory (truly satisfactory would be if it never happened at all), the entire thing consumed every moment that was not filled with previously planned activities.

However, after 5 hours, it was resolved and I thought, "well that wasn't so bad."

Then the phone rang and it was the nurse. I thought for sure this was related to the mysterious red toe I mentioned last night (which is now purple, by the way). Alas, it was not, but my son had a stomach ache and it just "refused to leave." I had to pick him up; but there was an efficiency because I also had forgotten items to drop off at the middle school.

Upon arrival, he made a show of hugging me while rubbing his belly and looking sad. Then he hoped in the car, boldly announced he didn't have time to eat and his sub was "yelly", so he decided he wanted to leave.

FRIENDS THIS IS NOT SOMETHING THAT IS ALLOWED! I AM VERY YELLY!

But, at least his toe was okay.

It seems that the school year, like the summer, comes with these complicated distractions that fill every moment in between work and prior plans. I accomplished plenty of work and other life things (and got contacts and now can SEE! Amazing!). But,  this filling in of quiet moments (when I could be thinking or peeing or ideating or eating a healthy snack!) is exhausting.

It has also given me a fear of the phone. In fact, a call came through and I assumed it was the school, but instead was Walgreens telling me my Mom's prescription was ready.

It is so much heavy lifting every single day. I am blessed with all of this; but I am also exhausted by it all. It feels great to be able to support the solving of my children's problems; but the problems seem never ending and I now as it stretches past 9pm, I am wondering if I will be able to get through the mountain of things I need to complete tonight, tomorrow or ever.

I keep telling myself that I can do it! But, then, guys, as I write this, Nicholas is taking an emergency shower (the second one of the day) because a pen "spontaneously exploded" on him when he "wasn't even taking it apart or shaking it very hard or trying to touch the ink."