Five years ago today was the last time my brother was conscious.
Then, in a flash, he wasn't anymore and never would be again. He'd live for another week in a coma with constant myoclonus--sudden full body jerks that would not cease even with sedation. I had to make the decision to withdraw care and endure the organ donation process. This is a trauma that I will never forget. I know most people don't want to hear about it. I know that people will worry about my mental health. I know that his story is so hard to read.
But, his story is one I need to tell over and over again because my brother changed the world just by being in it and he continued to change the world in his last week, even unconscious and seemingly missing from the world. I also know that I am completely normal--coping with grief and death is not linear and nor is it a sign of psychological distress.
It is important to live your own grief your own way. And my way is to talk about my brother and the things that happened to him, as well as the things that happened to me.
There are days when this all seems like a dream. His birthday always brings up this delusional, dream like sensation. Like I know it is his birthday, but he isn't here and did I really ever have a brother? And why isn't he here? And did all of that really happening? The same thing repeats on the day he choked and the day he died. Like how can any of this be real? Was I really a sister?  Did I really have to say good bye to him in an operating room? 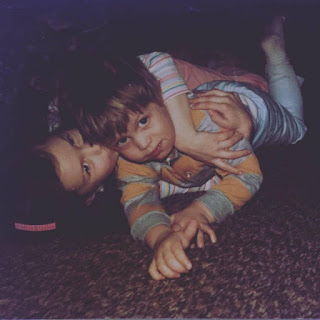 The answer to all of these questions is yes, I don't know, yes, I don't know, yes, yes.
I never question who my brother was--that memory is not fuzzy or fading. My brother was a giant--6'3." He had a temper and was stubborn. He never said a word; but I had the best conversations with him. He loved everyone he met. Everyone who opened their heart to David was forever blessed by him; those who never could open their hearts to him lost out on an amazing human being.
I am glad I had him--even though it was for such a short time. I am glad he showed me how to open my heart to someone who seemed so different than me. I am glad I actually opened it; because he changed the world when he loved me.
Posted by Trish Adkins at 6:08 PM