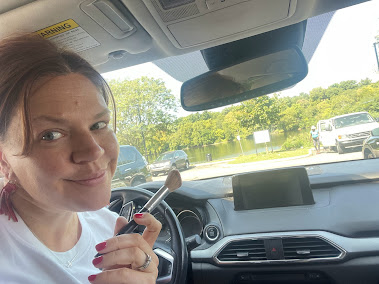 I often encounter people doing strange things out in the world. I feel like this even happened when we were locked down. I'd go on very, very long walks and then encounter other long walkers. Once, I witnessed a man fall into the lake while taking a selfie.

Don't worry, it isn't very deep and at the time, drowning seemed an unlikely way to die. I assume he is fine.

Today, as I sat in a parking lot by St. Joe's Boathouse, I witnessed a woman older than me in a bleach blonde wig using some sort of infomercial exercise machine that had her standing on a platform and doing "the twist." It was intriguing. I only noticed her because I was taking a selfie while doing my makeup and applying deodorant in the same parking lot. I immediately thought she was crazy, but then I looked at the makeup brush in my hand and the fig bar in my mouth and decided that I was the pot and was the kettle and I should change my mindset.

Plus, she stretched after her parking lot workout, so she must have some level of sanity and self-love.

But, people are strange, aren't they?

Later today, at the Temple-Rutgers game, a Rutgers fan sat down next to our family and noticed a beer can in her cup holder. She picked it up with two fingers, as if handling a dirty diaper, and then sort of threw it over to Lily, who looked right at her and mouthed "WHAT THE FUCK."

Of course, I nearly fell over laughing, because WHAT THE FUCK indeed, people!?! Can't you be like less strange in public.

This woman could not. Throughout the course of the game, she'd shove the can closer to Lily, who would shove it back. Then, she would become triggered by Mike's cheering and scream back at him (He did not notice) and then give him the finger. Once she told him to shut up.

It was very intense. Lily wanted to fight her; but Lily has good manners and two younger siblings so can deescalate situations that would make the bomb squad sweat with ease and grace.

For me, I couldn't stop laughing, because the whole scene was so over the top for a gorgeous summer Saturday at a college football game with two teams who were very evenly matched. Rutgers, won, only by  2, but a win nonetheless with leaves our team as the losers.

But, still it was fun! And it was really fun, with the extremely strange (and angry) row mate.

Maybe people don't need to be less strange in public, after all? I like to think I've entertained my fair share of human beings doing strange things. Like the time in Hershey when I was panhandling guests, by going door to door in the hotel, asking for a quarter because I needed to dry our bathing suits and I was a quarter short. No one knew what a quarter was and I began ranting about the education system and I did this while waving my arms around wildly holding several wet bathing suits.

Eventually I got a quarter from two older women who were just trying to have breakfast and who were trying to avoid "an off kilter woman who wanted their purses."

I think several people walked away with stories to tell and laughs to be had and in the case of those two older women: an order for pepper spray.