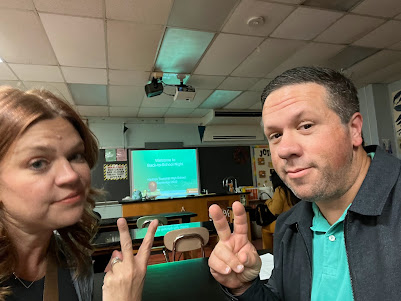 Guys, I went back in time and back to high school tonight!

Sure, it was just back to school night at my daughter's high school--which is a school I never attended. But, it looked just like Central Bucks East once I was inside, right down to the skinny lockers with the shelf above that gets stuck when you hit the release button because they were installed in 1964 and no one ever looked back or performed preventative maintenance. There was even a man, who I assume was the principal (not entirely sure as we were late and then I was mocking people) speaking very loudly and telling us what to do, while we all sat there will no intention of doing anything he said.

Oh and I skipped two classes!

Plus, I got to see so many of my friends in the halls! I also participated in the "blend in with the crowd" move when I saw people I did not want to engage with and I even got to use my very much perfected "distracted, haunted and damaged" blank distance look when I was unable to "blend in with the crowd," and avoid engagement while also creating intrigue.

It doesn't get any better than that!

Oh and I got to see my very best girl Jackie in "Child Development." It was great! I know we would have been partners on our "Stages of Pregnancy" project (coming up in the 3rd parking period!) and selected the pregnancy stage of "NOT PREGNANT PRAISE JESUS."

All this back to schooling had me reminiscing about my high school days. I loved high school. I would not say high school was the best time of my life; but I had a great time! By the time I stepped into the hallways of East, I felt like I knew who I was and I liked myself. Things just clicked. Sure, there was endless drama and angst and misunderstandings and arguments and friend fights. But, there was also making out with my boyfriend in between classes and feeling blessed to be friends with girls who were smarter than me and agreed to take me on in their AP Physics group for "creativity" and "local color."

Now that I've brought it up, I don't fully remember making out with my boyfriend at school; but he insists we did!  I think he is just bragging. But, I do I have a faint recollection of being concerned my half-sister's cousin's ex-husband would see and tell my Dad. (Mr. Baum was the biology teacher and I did not need him up in my business! It was bad enough we were actually not-family, but practically related).

I do recall cutting school at least once a week my Senior year to do things like: make-out at home, make-out in New York City, make-out on South Street, make-out in the parking lot of Perkins. So, Mike is probably right about the PDA which horrifies me a little bit now; but not that much since we are married and adults! STOP JUDGING TEACHERS! We are in love, 4-ever.

I did not feel like an adult tonight while the teachers (some young enough to my children) told us about their exciting plans for the year. I was excited about Junior English-College Prep! I was less excited about anything called "assessment," and zoned out when there was talk of being late to class.

The English teacher said we could come in and take the class.

I think he was kidding.