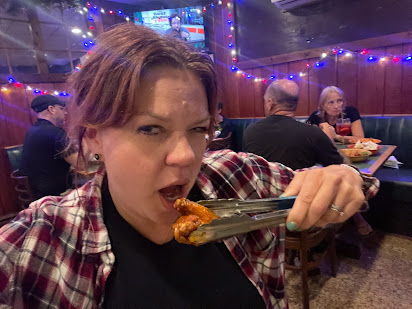 The best way to eat wings is out of a dog bowl at the Pic-A-Lilli Inn in Shamong, NJ. This is because, the wings at the Pic are quite possibly the best wings in the entire world.

I know, I know, you will read this and think, well, my wing place is amazing! And I am sure it is. I've had many amazing wings at other places and even at THE buffalo wing place (the Anchor Bar in Buffalo, NY). I've even made some pretty bangin' wings.

But nothing compares to the wings at the Pic.

We first encoutered these wings wayback when the Atkins Diet and South Beach Diet were popular (I was crash dieting for my wedding) and we were childless and marriageless and my wonderful colleague, who has the very beautiful name of Trish, told us we had to come to the Pic to see the Elvis Impersonator, get a souvenir comb and eat the wings.

The wings were good enough to make me break all the rules of my crash diet and make me realize my wedding dress fit me just fine and that's why I had a seamtress who could fix any wing related issues.

A million years and three kids later, we found ourselves starving after a hike in Wharton State Forest and sitting at the Pic again, with a giant dog bowl full of wings (we get mild sauce with hot and hot and honey sauces on the side) and our children in absolute awe over the wings they were eating. They are, indeed, young wing experts, having grown up with a Family Wing Bowl as a part of their cultural heritage.

So, now, we hike for wings because life is all about balance. Hiking 5 miles allows us to order a dog bowl of 25 wings, plus 5 ears (which are chicken tenders), corn nuggets (which are incredible and you dip in maple syrup), fried pickles (heavenly) and several beers.

Once, we went to the Pic without Lily or Chloe. Nicholas had a soccer game nearby--a game which was quite traumatic and terrifying (lots of angry parents) and we needed to soothe ourselves post-trauma. My daughters have still not forgiven us and I know they will tell their children about being left out of wing night.

The best way friends, to eat wings, is together, with a shit ton of napkins and a purse full of antiacid (to share). The wings are the Pic are fantastic; but the tradition is even better.