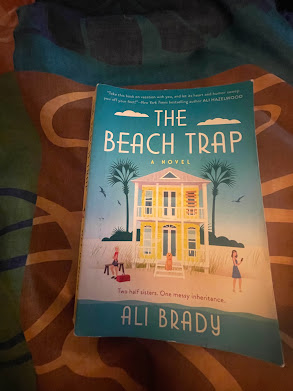 I tend to devour books when we are at the beach. I usually average one book every one and a half days. It is a fast pace; helped by having older children, who are good swimmers with a healthy awareness of the dangers of the ocean and a Dad who loves to jump waves as much as they do.

Today, I finished my second book of this mini-break: The Beach Trap by Ali Brady. It was an addicting read—with angst and humor and a major home improvement project and money troubles and a Parent Trap like twist with two sisters separated by dysfunction. It was refreshing that the separated half-sisters had serious issues with the dysfunction of their childhood and relationship.

Of course, everything in the end was wrapped in a lovely bow at a beach house and I wouldn’t have it any other way. Beach reads should always be wrapped up in a clam bake and a sunset! However,  a half-sister story line always gives me a bit of ache. I have a half-sister; we share a father, who is dead and we shared a brother, who is also dead.  My half-sister and I will never, ever rectify our dysfunction on a beach or in the suburbs. I don’t say that out of an unwillingness or because I don’t forgive her for being her. I say it because I know we will never wrap our stories together in a beautiful bow at a family beach house with our children around us.

It’s just not in the cards.

Books—even the lightest beach reads—have ways of trapping me in their stories and then making me think about my own. The book I finished Friday, Every Summer After, featured childhood sweethearts thrown back together after 15 years apart. The story had me rooting for the main characters: wistful about the time they lost and then, so grateful for all the time I’ve had with my own childhood sweetheart.

Tonight, I am starting The Dead Romantics, which is a bit ghost story meets romantic comedy. I look forward to being trapped in this story and seeing what stories of my own emerge as I read--hopefully nothing with ghosts, but you never know what might bubble up as I read through the pages.