Stop Feeding That Which Shits in Your Life (Day 222, Year 2) 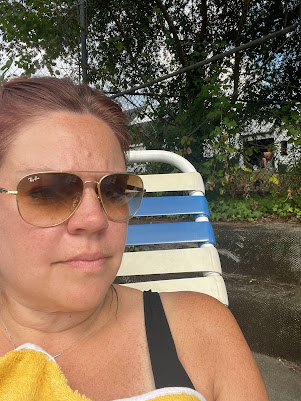 Today, during Adult Swim, when I was the only adult in the pool and pretending it was my pool, while reading a book and feeling my body temperature finally lower after days of living in Devil's inferno (aka South Jersey in August during a post-pandemic heat wave), I noticed the most shocking thing of the day:

Just beyond the pool perimeter, there was a grown woman feeding the geese. THE GEESE, you know the ones that I have mentioned relieve themselves in our pool, closing it, several times a week.

She wasn't just tossing some stale crumbs of bread out to the geese nor was she sprinkling bits of whatever geese eat. This woman was dumping large pitchers of food (geese food? bird seed? chicken hearts? crickets? who KNOWS!) and feeding the geese. THE GEESE who would later be so full from their buffet meal that they would take to the air and fly directly over our town pool, filling it with their excrement.

What kind of person does this? Who knowingly sets in mention a shit storm on her town? Who feeds the things that shit in their life (town pool)?

Before I dissect my deep, intense life reflections on the horrifying scene I witnessed, I'd like to clear up a few goose related facts. Apparently, it is illegal to feed the geese some places. In 2012, my fair town refused to make feeding geese illegal on private property because they did not want to get involved with the whole sordid scene (which includes delightful mothers who write lovely blogs complaining about INSANE geese feeders). However, the state of NJ recommends that one does not feed the geese, in order to manage the nuisance geese bring. Feeding the WILD geese is considered abusive, apparently.

Also, it is illegal to purposely kill a goose, because it is a migratory bird. But, they also don't want to deal with anyone admitting to an accidental goose-icide (especailly a delightful mother that I've never encountered before but have heard nice things about.)

Now that all the legal nonsense is out of the way, I'd like to go back to the feeding of things that shit in one's life. When I intially asked this question out loud, my middle daughter asked me to stop saying weird things in public. Then I thought maybe I should stop feeding her, but quickly pivoted away from that thought, because I should stop saying weird things in public.

I do feed a lot of things that shit in my life, figuratively speaking. When I cannot figure out the correct words to put on the page, I feed the notion of writers block and failure and choose to place no words on the page. When I having a period of trauma and horror over Lily's brian tumor diagnosis 15 years ago, I will feed that fear with hours reading ependymoma stories, when I could instead focus on the work I do to fundraise for research. When someone says something to that I don't like, I feed my wounded ego by reliving or rereading the comment over and over again, when I could simply bless it and release, moving on with my day.  When a high maintenance relationship is sucking up my time, I feed it by allowing it and paying attention to it,  instead of setting a healthy, non-time suck boundary.

I find the things that shit in my life more often than I should.

What I should be doing is feeding the things that don't excrete chaos and negativity in my life. I should feed each of those things until they burst out with rainbows and flowers. Instead of feeding the geese, that lady should get herself a shelter pet! (I mean might have one, I really have no idea. But you get my point!).

So let the goose feeder lady be a lesson to all of us, friends: Stop feeding that which shits in your life.