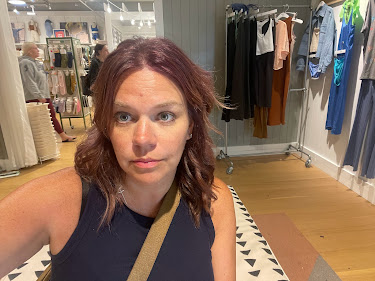 I love having daughters. It fulfills all these fantasies I had when I imagined being a mother—shared hair appointments, shopping, nail talk, eyeliner application and late night chats.

However, my daughters are crazy, especially when it comes to clothing shopping.

When I began to write this, my 16 year old was sulking because she wants a very specific type of dress she saw on TikTok. The 13 year old was literally rubbing and tugging on my arm whining about wanting a puffy sleeve shirt she saw at the Ron Jon surf shop, but not that one exactly “ but similar, (arm tug, arm tug) and it’s gone forever (wail).”

This was all in public for the world to witness. Although I did see a lot of very tired mothers carrying Aeropostale and Hollister bags, so they are probably used to the madness and blind from exhaustion.

My girls also got tangled in underwear at Aerie, like cats or toddler girls, which actually warmed my heart because as much as they grow up, they don’t really change. They even helped one another as they each got stuck in the underwear drawer. It was a true display of sisterly love.

However, they are growing up and need to know things like their actual bra size and remain resistant to getting fitted or even measured by their mother or sister or themselves in the privacy of their own home. Instead, they try on every bra in the store as if we are in some Amazing Race brassiere challenge and have some sort of free pass that ensures no matter when they complete the challenge (2.25 hours, for the record) they will advance to the next leg of the race.

Also, as a result of the unique life they have led, my girls speak to everyone about everything. One told the fitting room attendant at Aerie what brand of underwear I prefer as an effort to mock me. Another told the sales associate at Nordstrom that I had “no sense of skirt length.”

I don’t even know what that last bit means! But friends, they were mocking me in Nordstrom to Nordstrom employees! This is my happy place!

And everything costs a fortune! I miss the days of itty bitty clothes and tutus that cost half as much as the half of shirt they purchased.

Anyway, as a result of the brassiere challenge, the sorrow over the TikTok dress and the grieving over the Ron Jon puffy shirt, they became very hungry. I offered them all sorts of dining options and they choose: Costco and said, "We thought Costco dinner would give you enough money to buy us new shoes."

They are very considerate, those crazy, ridiculous, sweet girls of mine.