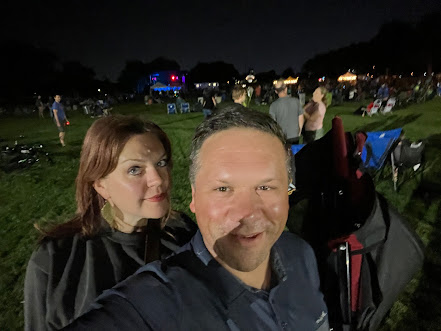 When I was a child, I sincerely believed that I saw the Beach Boys in concert at 13 times at a local park. I told some cousins this and they tried to argue with me, but I have never listened to anyone, so I continued to believe I saw The Beach Boys and got up to at least 17 times.

Then I saw the Full House special featuring The Beach Boys and realized I had been tricked by tribute bands consisting of middle aged dads from Bucks and Montgomery County who liked to sing about surfing, sunshine and girls in bikinis.

Pennsylvania does not have a coast and you cannot surf ocean waves in Pennsylvania!

You might be wondering why I saw the Beach Boys so much. Well it is the same reason I saw that I believed was Frank Sinatra, Nat King Cole, Elvis, the Beatles and Peter Paul and Mary: my parents loved these singers/bands and as a result, they loved a good tribute band.

Well, tonight, friends, I have officially become my parents and attended my first tribute band concert in the park. We saw the Ledbetters, who are a Pearl Jam Tribute band.

I am partially ashamed and also proud that I've reached this age. I attended Woodstock '99 and really on that basis alone, the odds were against my survival.

Have you been to a tribute band in your local park as an adult? Well, if you haven't, yet you are reading Yoke, I am sorry to say: the writing in on the wall and the AARP magazine is in the mail, a tribute band is in your future! Here's what to expect at a tribute band concert:

1. You will find out about the Tribute band via screenshots texted to you, in the manner of a grandpa who used to clip out newspaper articles and send them with a stamp.

I had noticed The Ledbetters were headed our way in our Camden County mailer and then promptly forgot. But lucky for us, my neighbor Molly took a screenshot of another friend's post that read "If you like Pearl Jam, there's a cover band" and sent it to me. Then Mike and I had a bit of a tiny argument about what I was wearing. I was dressed as a prisoner (strange drab gray clothing that is only suitable for wearing in a prison cell or at home with your loving family) and wanted to change and he was concerned about being on time.

Anyway, I did change! And we were RIGHT ON TIME!

I will not ever bash the musical stylings of a tribute band. Imagine standing up and trying to sing like your favorite band! It's very brave and incredible. However, I will critique the costuming. Tonight, Tribute Eddie (Teddie) was dressed in athleisure shorts and I will be upset about this forever!

Like at a regular concert, there is always some super tall, giant person who arrives late and stands in front of you getting situated and blocking your view. Meet tonight's giant: He arrived very late, stood at least 6'5" and was unable to open his own chair and required assistance to be seated.

The giant was assisted by his date/nurse who was smoking a cigarette. The cigarette was literally dangling from her mouth as she helped with the giant's chair. I am surprised by cigarettes every time I see them, BECAUSE EVERYONE KNOWS SMOKING CAUSES CANCER AND EMPHYSEMA and COPD AND DEATH. However, I guess Eddie Vedder still smokes, so she was just a surprise tribute smoker!

Tonight, there was a man who would shout out something that sounded like "ELP" or "YEP" or "WHELP" or "HELP." If it was the latter, I apologize for not helping him. The strange outbursts were intentional and seemed to coincide with the applause. His wife was very proud of him and encouraged the behavior. I will never be friends with his wife.

6. Realizing these are the people who will be with you at the nursing home.

Here's the thing, once you hit Tribute band age, you realize the other people there: the giant, the smoker (if they survive), the outburster, the man who just sat on his cooler, the woman who fell asleep and the rest of the motley bunch represent your PEER GROUP.

The people at the Tribute band concert will probably be the same people who live with you in a nursing home. It is a depressing thought.

There is a point when maybe you've had enough of the Tribute band or when you are suspicious it is the last song. At that point, the spirit of the elder years compels your husband to leave early to beat the traffic.

When you are on limited time, you cannot ever waste time in traffic. Tonight, we left early, to beat the rush, because time is short, friends.