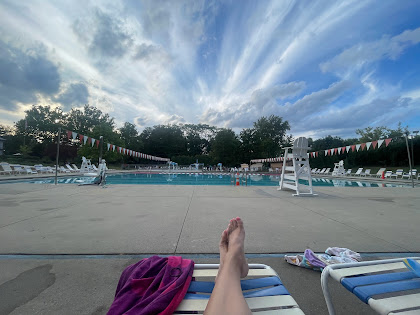 The geese crapped in our town pool again today. They just flew right over, without a care in the world, dropping their waste right into the water, which has been the perfect refreshing, not warm and not frigid, temperature.

So the main pool closed. Everyone was disappointed (except the geese, of course. I imagine they were relieved.).

Prior to this we had quite the day. Having quite the day was unexpected because we did not have quite the day planned. We had no official plans, minus the small town things I like to do on a summer Saturday when we have no official plans. We hit up the Farmer's Market, saw our friends, scored Duker's Chicken Salad and an array of empanadas and breakfast sandwiches and fruit (highly recommend the Pristine apples!!) and vegetables and scallops (the best!). Plans for the pool later. Scallops and spicy black beans for a later dinner. In-between, I thought we'd get our house in order because we've been like gypsies lately and the chaos and debris was even starting to wear on me, the woman who prides herself on being a gypsy and thriving in disorder.

Of course, when I mention the word, "clean-up" to my DELIGHTFUL, helpful children, the response is not delightful or helpful. The youngest one screamed, like literally screamed as if being accosted in a parking garage with the nearest person several blocks away. My daughters had their own backlash, which included the staging of a several hour long fight over very complicated psychological issues and triggers.

At one point, everyone was actively cleaning and dispersed in a variety of areas in the house. We finished. We had a lovely lunch of farmer's market finds. Then, I thought, wow, I can relax and read a book.

But, the children who did not want to clean hours earlier were upset they did not have "direction" and that no one was understanding their room "decorating and reorganization" projects.

Yes, friends, my children were upset they were not allowed to clean anymore.

So another 2 hours of insanity (with breaks to weed the garden, in an aggressive, therapeutic fashion) and then some peace talks. We discussed, endlessly, how we can all choose to stay angry or to step out of the anger and into the resolution.

They were not buying it; but then Mike turned off the Wifi and unplugged the TV and suddenly everyone wanted to step out of the anger (and of course, this "boring house with all you people") and into their bathing suits with fake smiles.

I mean, isn't this what we all do to get through life? Fake smile for endurance?

And then, everyone made it to the pool. And after about an hour and a half, those freakin' geese crapped right in the pool and everyone had to get out.

Chloe said: "What difference does it make, we've already been swimming with the crap?"

And friends, it is hard to argue with this. But, as I mentioned to my children earlier we all have a choice: You can stay angry and swim with the crap, or you can just get out of the pool and get on with your life.

Luckily, the splash pool was open. I mean it was lucky for about 1 minute. Then they had a sibling domestic in the splash pool. I did not witness it; but I can imagine, friends. But it's fine, they are happy now, enjoying a cafeteria style meal of macaroni and cheese and carrot sticks and laughing and actually, fine. They've gotten out of the anger and the crap and into the (temporary) joy of having one another.