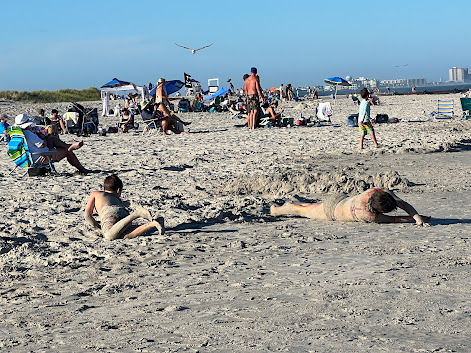 I may have mentioned the teenage girl fighting that I've endured this weekend in a previous post and also in several mayday texts to friends. It's been intense and a roller coaster. I thought we had gotten through our trials of sisterly fighting on Saturday.  However, when the sun rose on the Lord's Day, the devil was back at it and stirring the pot of complete and utter insanity. This time Lucifer was using our beloved Target as a weapon. I cannot even get into the details, but I did say "I DON'T CARE ABOUT TARGET AT 3PM" at least 667 times.

Friends, I am only able to write this because by the grace of God and all things salty and sandy, we more than endured, we conquered and thrived.

It just took several prayers; lots of patience and avoidance and a stubborn refusal to engage, balanced out by a surprisingly humble ability to quickly apologize when engagement occurred.

Oh and the beach, it took the beach. That cures everything, right? People have long flocked to the seaside for the health benefits of the salty air. Summers of my childhood were spent getting severely skinned knees and then, in turn, jumping into the crisp Atlantic Ocean, enduring the salt sting while my parents yelled, "The salt water will heal your cuts! Stop crying!"

There is just something so perfectly peaceful about the shore. The birds, of course, entertain Mike and I now in our elder bird-fetish years. There are people who made bad beach fashion decisions to make you feel better about your own choices. There is absolutely always someone fatter than you and I know that isn't nice, because there is someone skinnier than you, too. However, you can simply pivot your chair to look upon those who lift you up, instead of those who make you vow to begin an intense fitness regiment and feel badly about the potato chip crumbs in your cleavage.

When the children do happen to complain, which really did not happen much today, they are hard to hear because of the gentle, soothing, thunderous roar of the ocean. There are lifeguards to secure your safety and to be the bad guys when your children partake in obviously risky behaviors. After they yell at your children, you can both complain together (as loudly as you want! No one can hear you!) and the lifeguards become the shared enemy and in turn, the savior of parent-child relations.

Dolphin even swam by today and not the aggressive kind who want to "cuddle" inappropriately with humans--no the distantly cute kinds (that might have sharks chasing them, but whatever!).

And, of course, there is the sand, which lends itself to the marvelous sport of "corn-dogging" when your children roll in the sand and turn themselves into human corndogs. My children learned this skill from a beloved childhood friend on a beach in Puerto Rico. Nicholas was not yet born; but Chloe has taken on the roll of corndog coach.

It's the best sport on the beach. Of course, you can bring balls of your own or toss around a strangers left behind ball. You can walk alone to the bathroom and take the long way there and back, claiming there was a long line and squeezing out a tremendous amount of me-time.

The breezes cool you off; the water is wet (always!) and the sand is plentiful. It is the perfect cure for all family ailments ranging from having teenagers to having a 9 year old boy who is addicted to the iPad.

Of course, you have to leave the beach and then your children realize that those several rounds of "corn-dogging" were not really worth it.