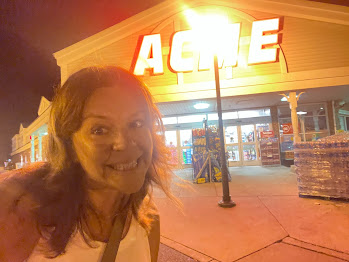 Tonight, I went to the shore Acme for a minibreak. I am technically already on a minibreak with my family in Ocean City, NJ. However, today has been extremely trying. I needed to get away from them. And Acme at 9pm on a summer Thursday is a delightful, empty place with cookies.

The day began with early morning screaming over bathing suit bottoms. I was trying to wrap up last minute work and prep for a meeting. My children were trying to stir and shake the pot of crazy until it exploded.

By the time one of the girls was laying on the floor sobbing that they "could not do this anymore," Nicholas, the wisest of the Adkins Three, went back to bed. I am still not sure what it was they couldn't do anymore. It wasn't screaming; they were actively shrieking. It wasn't crying; they sobbing while shrieking. It wasn't acting batshit crazy; they were literally behaving in the way you imagine someone does in the midst of a full mental break.

I imagine that I'll never know what they "could not do anymore," and I guess that is okay.

The next three hours involved emergency talks to discuss bathing suit bottoms. Then there were emotional triage over concerns someone did not have enough jean shorts. Later, there was active hiding in the art closet to avoid dishwasher duty. At some point, one sibling demanded another sibling get off the toilet to take out the trash to avoid making me "angry."

By the time we reached the toilet/trash episode, I was a bit on edge. So, I did what all Peleton Moms do in an emergency: I put on a Spanish language 10 minute peace meditation and made the children sit and listen; while I went to the basement to grab 3 additional bottles of wine.

The children proceeded to complain that they did not understand Spanish and then one called another one "racist." Lucky for me, the racist fight was muffled because I was picking between a red and a sparkling wine in the basement.

By the time the meditation was over, they were so bored that they'd lost their fight and got into the car for a quiet and delightful ride to the shore. We arrived; they became overjoyed and then, the salt air seemed to reactivate their energy. There were several compliants about irrevelant things (a meal in 2019 in Wildwood; the last cookie eaten in 2020.). But, everyone seemed able to continue doing things, so that was a win.

Then, the knocks on the hotel room door began every second, while I was showering, asking questions I could not hear and demanding entry. It was the most RESTLESS shower of my life; however, it gave me time to make a decision:

I was to practice #self-care and head to Acme for a minibreak and a cookie.

And friends, that may have been the best trip I've taken all year.