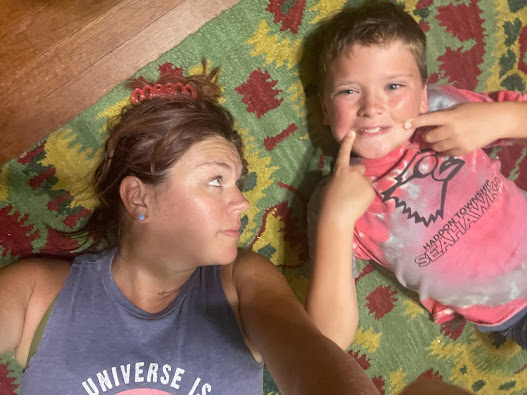 I decided it was time to get back on the Peloton tonight. It had been a minute. . .like if a minute is equivalent to a month or so. We've just been so on the go and here and there and Europe and Connecticut and who knows where else and that I got out of the habit.

If I am being entirely honest, the habit I was out of wasn't very good at all. I'd ride once a week; sometimes a run or a walk and occasionally I'd lift a weight. So being out of the habit which was an insufficient habit wasn't even a big deal.

Anyway, when I started my ride, I instantly began receiving a trillion high fives. I seriously thought everyone had missed me! (I know like two people in my followers list and I live with one.) Then I realized that I was probably doing a milestone ride and the only way I made it to that milestone ride was because my children probably did 780 rides on my profile.

But, I kept at it for two reasons:

1. I was clipped in the bike and basically trapped

2. Exercise is good for your heart and I live in constant fear of heart disease (both rationally and irrationally).

And guess what? It was my legitimate 500th Peloton Ride!

(My kids used my husband's profile for the 780 rides they begin and stop at random.)

Sometimes, happy accidents happen! And frankly, if I had realized it was going to be my 500th ride, I would have delayed and scheduled and made a whole drama over it and maybe completed it in October, instead of now.

I told Nicholas it was my 500th ride and he suggested that I work harder and do some abs (such a doll that boy of mine). Since he is a bully, I did abs (he did them with me) and now I am exhausted and ready for a cocktail and a shower.

I am proud of myself for getting back on the bike, reaching this milestone and outlasting my son during the hollow hold (take than 9 year boy!).