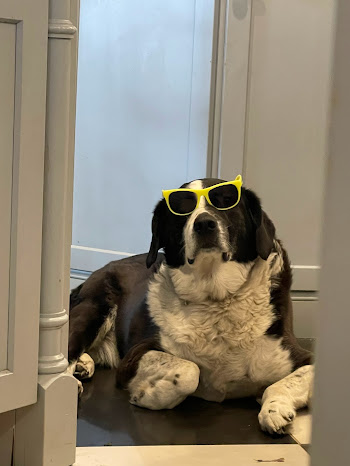 Whenever my husband goes away the following things happen:

1. I take my children on ridiculous adventures to ridiculous, wonderful places (today: Wild West City where Nicholas went off script, stole the show and led some small children he converted into outlaws into the forest, much to the irritation and concern of other parents and the actors at WWC).

2. I work early in the morning and later at night to compensate for the adventuring.

3. Nicholas refuses to go to sleep without 5 solid hours of Scooby-Doo.

4. My dog, Henry, goes batshit crazy which drives me batshit crazy and in turn has me shouting bizarre things in the yard like, "COME IN THE HOUSE YOU GOOD DUMBASS."

I am really not at my best when left on my own, friends.

However, I love habits 1 and 2 because even though this lifestyle is incompatible with marriage, it suits me. So I get to try it out in short intervals. (I'd rather be normal with Mike home, though). I can deal with issue 3, because there are two clear options: Scooby-Doo or Scooby-Don't (tonight we are Scooby-Don't, which means my 9 year old son is currently "crying it out" as if a baby and I am listening to Sam Smith on my AirPods until the crying ceases.).

Issue 4 is completely unmanageable and I might lose my minds, friends.

The moment Mike leaves, Henry tries to become the alpha and dominate me by irritation. He demands things 24-7. He will not rest. This morning, I was woken up at 5 am with his cute, wet gumdrop nose 1 inch from my own. He wanted to socialize or some shit.

It was HORRIBLE (although his nose is still adorable! See, he's irritating!)

He barks for more food and more water and more and more and more. He refuses to go outside. Then he refuses to come inside. Then he refuses to back away from the white and black blur that is definitely a skunk or is barking at something he cannot see but is imagining,  which forces me to go outside, wave a Twizzler or a hunk of broccoli around like a meat stick (he's got the eyes of an 80 year old) and drag him in the house yelling, "COME IN THE HOUSE YOU GOOD DUMBASS"

Honestly, it is a lot.

Henry was diagnosed with diabetes the same time I was (also annoying! It takes the spotlight off my diabetic stories!). We give him insulin twice a day. When Mike isn't here, he dancing and spins and twirls with he sees the needle. The first time I thought he was very smart and knew the insulin made him feel better.

However, he's brilliant and just trying to evade the injection and irritate me and own me and dominate me into giving him Beggin' Strips.

And tonight, I discovered we are out of Beggin' Strips. . .so I thought about going to the Walmart and buy him some and then I realized, OMG my dog's plot is working! He is starting to dominate me by irritation. And it makes me angry; but then again, he is so smart! Like the smartest, cutest, most ANNOYING GOOD DOG.

So, he's won, friends. I am currently scratching him behind his annoying ears and wondering how I got such a smart, irritating, adorable dog.