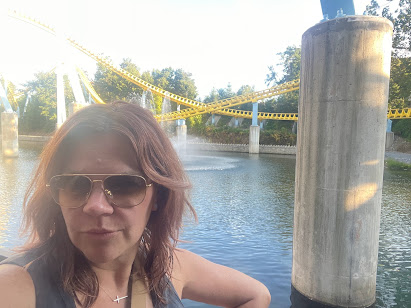 Well, friends, I am officially overtired. I think Nicholas might be as well, if the nonsensical sobbing about bedtime is any indication. He literally just called being tired: "stupid."

I tend to agree. I hate being tired. I do enjoy sleep; but I enjoy being awake and go, go, going until I collapse much more than any nap. We did our second Hershey overnight of the summer and this involves constant going--going to eat, going upside down, going fast, going into a line, going to Troegs, going and going and going.  Every time I thought about giving up and blaming my age; I remembered my father was 70 years old when I was Chloe's age. And you know what? That literal old man of mine never gave up on an amusement park or a roller coaster.

So, while I sat out the rides that make me feel like I might have an actual stroke, I went on everything else, all the while praying to my dead father and the non-person ghost of the Great American Scream Machine (which opened in 1989 at Great Adventure and has since closed) that I would not projectile vomit while waiting to be unloaded.

I did, however, suffer a tiny head injury yesterday on the racing water slides. I do, blame, my husband who said the purple slide was cursed (he lost about 12 inches of skin as the result of a nasty slide burn in July on purple). His proclamation very clearly made the purple slide angry, because I hit my head on it and briefly wondered how long it would take the lifeguards to notice the unconscious lady at the bottom. (My family would be too busy fighting over who won the race.). But, alas, I rallied through the head trauma and emerged conscious and ready to prove that a potential concussion is not the same as an actual concussion!

It was an intense, but wonderful, weekend!

However, now, I am exhausted and I just want everyone to go to bed. Of course, the girls will have 507 fights before bed over things that make no sense (itchy blankets, complaining, items missing since 2019) and my son will sob and recover; sob and recover and never, ever go to sleep, because, of course, being tired is stupid.

I also will sob and recover and sob and recover until I am finally allowed to sleep. I should actually shower; because I was in a water park for half the day. But, then again, I am not sure I can bring myself to do it and the moment I get in the shower, someone will pick a fight over the plans for tomorrow (cleaning the house!) and scream there is nothing to eat for breakfast (8 hours before it is breakfast time), so the shower will hardly be restful.

In fact, the hysteria has already begun. . .