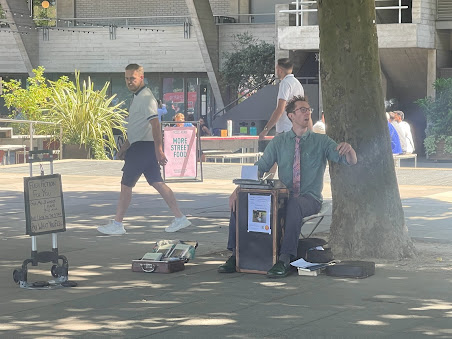 Today would have been my brother's birthday and I think that was mostly likely somehow lost in yesterday's Yoke, buried well below the lead.
I don't need to go on about how that all makes me feel. But, of course, I will go on a bit. My brother should be here (not in London, he was a bad traveler; but here, on earth, breathing). He isn't here and no amount of insisting that he should be that can bring him back. I love thinking about him. I love the part of my own life story in which I have David as my brother; insisted of as the brother I once had. Sometimes, though, thinking about him is a slippery slope that takes me quickly from reminscincing to full on sorrow.
I haven't mastered staying at the top of it all, yet.
Anyway, today, July 9, my brother's birthday. We always celebrated our birthday's together with our grandparents, usually as part of a July 4th picnic. I hated it; because I wanted my own day, closer to my own July 24th birthday.  Now, I feel like a jerk for not remembering more of those joint celebrations and for frowning in most of the pictures.
I told you, a slippery slope.
But, today, I decided I'd let my brother's birthday go; just let it be, what it is. I am in London, after all, on vacation! So I let it go, but then I stumbled upon Adam E. Holton and he wrote me a story about David.
Now, I should disclose that he had every idea that he was writing about David and at the same time, no idea. Adam, whose name I only learned via internet stalking (although I think he would have told me if I asked. Sometimes, I forget to find out basic things.), had a sign that read "Flash Fiction For You. Give me: 3 words, 1 name, 5-10 minutes and I give you the story. Pay what you feel."
He had a typewriter and was typing away, while Nicholas told me that I should begin writing my Yokes on typewriters and I explained it would not actually work with how I publish the blog on blogger, which is not typewriter compatiable. I told Mike I was getting a story with the name David, of course. Nicholas helped me a little with the three words; but I did , in the end reject "dance" and "light saber," although those are both good words and reflect Nick's memories of his uncle.
I settled on "Music, brother, eyes."
When Adam (who at the time we called "The writer") finished up and called me over, he gave me the story and I was so delighted! I had already decided I'd be happy, because here was a fellow writer doing writing on the Southbank of the Thames River for strangers. But, when I actually read the words, I was so filled with gratitude at the sweet story.
My favorite part is "His music was inspired by the places they tried to hide, to movements their bodies made to the sound of the world around them." 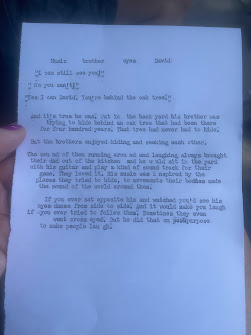 My sweet brother had no words; but he had all the music and all the movements and the vibration of the world around him. I think about his story forever, I think. It is almost a new memory of him--a gift when death has seemingly robbed me of more David memories; but then the words defied all of that and brought me a new one.
Posted by Trish Adkins at 4:54 PM