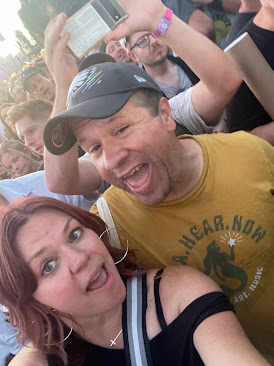 Pearl Jam played a few of my favorite songs tonight in Hyde Park. It never gets old for me, even as I get old.

I've loved this band since I was 14 years old.  I've seen them in concert enough now that I know when something is extraordinary (opening with Betterman; performing Breath from the Singles Soundtrack) and when something is expected (Eddie's wizened rants about the state of the world and changing of lyrics to reflect the current crisis).

Mike and I discussed our guesses for the opening song; I am never right. Mike is a student of the playlists; he was nearly right with Low Light, whiched ended up being song number two. We thought maybe there would be some Pink Floyd covers (there weren't any). And I wished for Given to Fly.

Given to Fly is the song that reminds me of my brother. I don't really know what it is supposed to be about--and isn't that the wonderful thing about songs? Songwriters write things with their own intention; but once that song is out in the universe, the meaning is whatever you make it.

For me, Given to Fly it is all about David. David should be celebrating his 42nd birthday tomorrow. But, of course, he has no more birthdays. I hate that, you know. It makes me wish that David never had a birthday; even though I would never wish away his time; I just don't want the milestone to mark. It breaks me.

But, when I heard Given to Fly tonight, it was like unwrapping a Christmas present that I asked and asked for. The lyrics. ."And he still gives his love, he just gives it away," well my brother loved so freely and fully. Everytime I hear those words, I feel like my brother's heart may have stopped, but his love still beats on. When I hear, "sometimes is seen a strange spot in the sky, a human being that is given to fly," well I think of my brother, with the "key to locks on the chains" unlocked. I think of how much he was a prisoner when he was alive--non verbal and unable to say the words I often write so carelessly; judged by his difference and trapped without all the choices I have.

And now, he is not here, which is painful and horrible; but I think sometimes, when I look up, I see him--given to fly and free.

Tomorrow is Night 2, after a full day of sightseeing and Londoning. I can't wait to see what Eddie and the boys have for us to unwrap.