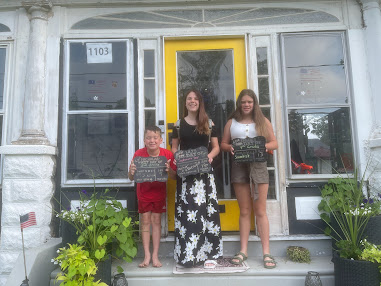 Well, friends, we did it! Another school year is a wrap around here.

I am so glad. I was so exhausted from it all that tonight after we returned from celebratory hibachi, I took a two hour nap (and now I am ready for bed again!).

The end of the school year is a lot. Today was particularly trying. First, we had the traditional last day of school photos with the signs the children don't seem to really like. Well, actually, first, there was the traditional sibling fighting, which left no time for me to have coffee. Then we had the photo shoot!

I make them all be in the group picture, despite it meaning someone is most likely late to school and someone else is forced to get up too early. My children are well aware that this is how I am and I look forward to the day when they talk badly behind my back about me, together, while planning a surprise 30th anniversary party for Mike and I (hopefully it is a destination party!).

No one is very cooperative. Someone (Nicholas) always rubs their chalk board sign on their clothing, rendering it illegible. Another someone (Lily), smiles while muttering tense things, like "just take the picture already." And the middle someone (Chloe and me), often has to step away for a moment to scream.

To her credit, only Chloe has figured out that you keep the answer to "what I want to be when I grow up," simple and only change it as you change schools. For preschool, she wanted to be a "mommy." (Don't tell the others she is my favorite!); for elementary, it was a "meteorologist" and for middle school, it has been a "scientist."

The other two change their minds. Lily has argued with me about what to write since the beginning. The space is small, I can write out the description of "an artist who is also a pop star and does not work because they won a really big prize" (kindergarten) or "I'd like to manage in musical theater and minor in psychological and use theater arts to help children, just not those with cancer, because I cannot handle that." (10th grade). For this year, I settled on "an actor and a therapist." To her credit, she does not even look at the sign. Lily just holds it and is resigned to whatever it says. (I'll have to give her college roommate very specific instructions! Just kidding, we will all show up for her first day and take a photo together!)

Nicholas is always selecting something he's recently heard about on NPR. One year, it was a neurosurgeon. Another year, a trash truck driver (Waste Management sponsored their membership drive!). In the Fall, it was a college athletic director and this year, it was an engineer at NASA (who designs an inter-space highway with medical centers for astronauts with tumors; this is actually a thing.).

All of these future career negotiations were exhausting. Nicholas also wore all one color, creating a monochromatic feast for the eyes in his bright red, too small, soccer uniform shorts.

Needless to say, by the completion of the picture at 7:32 am, I was ready for a nap.

But, alas, I had to drop off missing and requested items, snacks for the 3rd grade, pick up ice cream and water balloons for one kids after school celebration, answer demands for money and then work. Sometimes, I don't think my children understand that I have a job (beyond catering to them and handling their issues). But, that's okay, I love how much they know they can ask me for absolutely anything, at anytime and somehow, I'll do my best to make it happen.

I hope they remember that when they are complaining about their first and last day of school pictures. I think they will, because, I have no doubt, they will ask me for money to pay for my surprise 40th anniversary destination party.