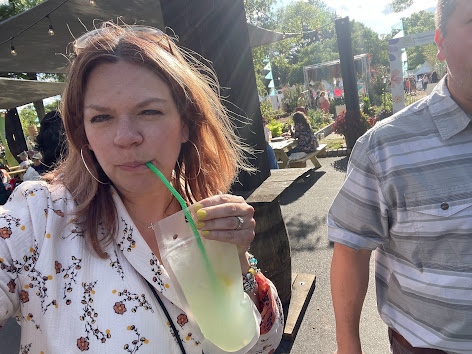 This afternoon we went to the Philadelphia Flower Show!

Our neighbor, who I've written about before and often fake being on a very professional and serious conference call to avoid, gave us tickets that someone gave him in exchange for some sort of work (I am not providing anything in exchange!). The tickets did not work upon arrival. However, I am haughty and very entitled, so some nice lady scanned us in!

It was lovely. The last time I attended the Philadelphia Flower Show was at the Philly Convention Center in Chinatown in February pre-COVID with a tropical escape in mid-winter vibe. Now that the show is outside, the vibe is entirely different! It is more like a wonderful drinking event in which everyone pretends to enjoy the flowers; but really we are all there for the ADULT POUCH FILLED WITH LEMONADE AND BOTANICAL VODKA! (they even have long bendy straws that are very user friendly!).

It actually reminded me of the last time I was in FDR Park, wayback in 1994 for Lollapalooza!

It was my very first concert, ever. When I got permission from my father to attend, he said, "Well, by the time I was 16 I was already hitchhiking to Florida, so I guess you'll be okay."

Hitchhiking to Florida was probably a safer choice than Lollapalooza. I lost both of my best friends as soon as the Breeders played Last Splash. I did, however, find other friends (which is bizarre, given I was from far flung Bucks County) and then eventually, I found friend 1 and then friend 2, who was our ride (and the only reason my Dad allowed me to go!). She no longer had shoes and was planning on leaving us in South Philly. Luckily we caught her with her engine running, but stuck in parking lot traffic.

And in the end, she was in my wedding, so you know I am very forgiving.

But, back to the flowers of today! There were, of course, some very lovely flowers. I enjoyed the lily display the most, because the lily is my most favorite flower (and one of two of my favorite daughters). There was inspiration for my future outdoor fireplace and Victorian dipping pool and then there was a horrific display with mushrooms that will haunt me for an eternity.

And I love mushrooms! Just not in a tower that feels like it might consume my body and decompose it. (zero stars!) But, look, the unsightly gives us all something to talk about and laugh about, while sipping vodka drinks out of large pouches.

Speaking of the large pouch, I dropped it once, when startled by an interactive display that suggested we lean in and listen for nature sounds. My nature sounds were a weird voice saying, "I heard a dog pee."

This caused me to drop it, but only a drop spilled! A few other middle-aged ladies cheered and really it was just like 1994 in the Lollapalooza bathroom when I dropped my Cover Girl lip gloss and caught it before it landed in the toilet.

But, the best part was an afternoon sojourn with my delightful husband (and father to my feral children, who take after him in every way), sipping cocktails, taking very non-instagrammable selfies, laughing and just being together amongst the flowers.

The Flower Show is only on for one more day--but since tomorrow is Father's Day and there is a very large beer truck at the Show, take your husband and fathers! They can drink and you can walk amongst the flowers and listen to whatever nature has to tell you!