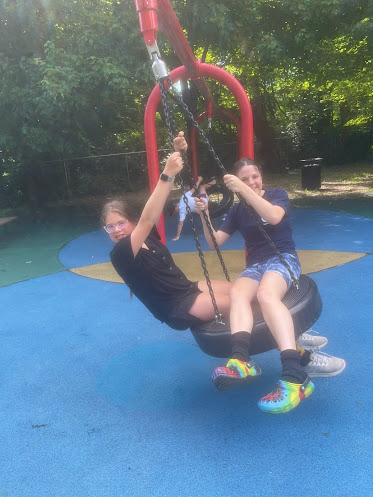 Today, I had a virtual pediatrician appointment while sitting on the banks of the Schuylkill River, leaning against a Spotted lanternfly covered tree (I killed 6 of them with my free hand), watching my oldest row a very skinny boat, my middle do cartwheels (very close to the river) and my youngest try to disclose that we were not currently in New Jersey.

I am pretty sure several laws were committed in those 7 minutes; excluding the law of attraction; because friends, I tend to focus on chaos and in turn, I attract chaotic things, like illegal riverside (literally on the side of the river, not the Riverside medical buying group) tele-health appointments.

The good news is I got to see Barb at the CVS pharmacy tonight (just saw her Friday!) and she asked about our diabetic dog, so I guess Barb is family now. I am going to add her to the Christmas gift list. I also might see if she can water my plants when I go on vacation.

In one day so many things happen, that I sometimes forget all the details of the things that happened.

Like yesterday, when I was leaving Costco with Chloe, we heard a very strange, loud sound and we both believed it was a military plane coming to round everyone up for quarantine at the end of the world.  We confirmed this when we both simultaneously yelled, "NICHOLAS GET IN THE CAR, IT IS TIME TO GO," and then looked at each other and said, "I think it's happening, good thing we went to Costco"

Anyway, it was NOT a military plane coming to round everyone up for quarantine at the end of the world (this time); instead it was  NJ Transit train pulling into the Cherry Hill Station. BUT, it is still a good thing we went to Costco, because you never, ever know what else could happen.

Today, before the riverside (literally on the side of the river) tele-health appointment, I did manage to get to Smith Memorial Playground for an hour, despite several road closures that can only be due to the filming of an M. Night Shaylaman movie. In the process, I definitely went around one (okay, three) police barricades while smiling insanely and acting like I was supposed to be there. While at the playground, photographing my girls on a swing and reminiscing about the days when they were little and playing together with matching pig tails, my son managed to fall out of a tire swing and become entangled in the swing, only to spring back up and hit his head on the tire swing chain and then fall back down. (He's in the background of the photo above). He's fine.

Anyway, prior to the tire swing incident, my children did get in a very loud argument with another a group of children (who were the average age of 4) over proper burlap sack usage on the giant wooden slide. I suggested that they keep their opinions to themselves; but the 4 years were not scared of my children (average age 12.5). They should have been; because my children stole their burlap sacks and did not feel badly about it.

Rules are rules, said Lily (And she is the nice one).

But, it all worked out, and tomorrow is a new day of bullying, police encounters, lying to medical professionals and doing important business near the water all to attract chaos, as I seem to enjoy.

I feel I should note that my husband woke up in New Jersey and made it to Indianapolis before I even was able to put new mascara on over my old mascara for a very professional video call. And then, he made it home before I was able to eat a meatball sandwich for dinner.

He does not attract madness in the same way I do, apparently, and can move from east to midwest, without requiring medical or law enforcement assistance.