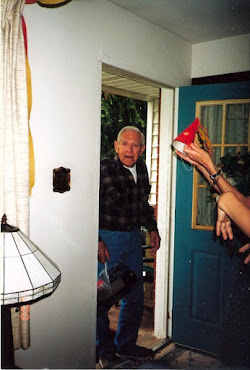 Today, my Dad would be turning 102, had he lived to be 102, which is a ridiculous and impossible age to imagine. Today is also the anniversary of Lily's brain tumor diagnosis, 15 years ago, when she was just 14 months old. It's an emotional day; as it always has been. The emotions shift and change. I am so filled with gratitude for my daughter's survival. I am so gutted that my Dad isn't here anymore to witness it all and them all--Lily, Chloe and Nicholas.

Anyway, I wrote him a letter.

When I woke up today my first thoughts were: I need to call my Dad for his birthday. It has been like this every year since you died. I almost wrote "left us," but you always taught me to say exactly what I meant to say--just cut to the chase, Tricia.

I decided to do this silly exercise and write you a letter that I have no idea if you can read (can you read when dead?) or maybe you just sense the meaning. Maybe everything I am writing here is redundant. Maybe it isn't. I just don't know. I don't know if you are watching out for us or looking over us.

Okay, cutting to the chase.

On your 86th birthday, I called you. You picked up expecting me to say "Happy Birthday" and instead I had to tell you that your first granddaughter, Lily, had a brain tumor.

I hated telling you that. I know it's silly to have this feeling; but every time we had to tell someone the news, it was so hard to hear and see their shock and sorrow. But, that day, you told me two things: to pray and that Lily would be okay.

I did pray, under protest, because I was really angry with God. And Lily, well, Dad, today, she brought me home a stack of college brochures.

You told me 15 years ago, that she would be okay. And she is.

Lily reminds me so much of you, Dad. She looks like you--the Carrington is strong in her and she has your nose. She even talks to herself, just like you did when you were trying to figure out a complicated problem. Lily lives everyday and every moment to the fullest; just like you used to say "I am going to die with my boots on." Lily is never down--even last year when she had to have emergency surgery, she was wheeled out of the operating room telling the team that she needed to be discharged to get back to school for her choir concert.

She decided she wants to major in Theater and Psychology. I know, know, it does not sound very practical. But, Dad, Lily has a dream of helping people--kids--kids like her--through drama and art. I remember how you used to get caught up in my dreams. I'd tell you my wacky idea and a day later, you had your own amazing idea for me--a spin-off or an angle I never considered.

Thank you for doing that for me; you taught me how to dream with my kids--and then them run with it.

And Chloe, Dad, she is exactly how you predicted: giving us all a run for our money. She is smart and opinionated and has the biggest heart. The talks the two of you would have about everything! She is also really great at helping fix things and build things; in a way I never was. She'd be the one helping you on your projects. She is in love with the outdoors. She wants to be a scientist--any kind of scientist. I'd be remiss if I did not mention Chloe's long, long hair. She loves her hair.

Chloe has David's eyes--big and gorgeous and twinkling. I love looking at her and seeing him.

Chloe tries to remember you, Dad, but I know it's hard for her. The sad stuff is really hard for her; but somehow she's taken everything sad and just transformed it into becoming such a powerful force.

You saw it when she was just a little toddler.

And Nicholas, well, I never got to see you two together. He is absolutely something else--endlessly curious, knows everyone everywhere, remembers everything and is fiercely loyal. He gave up baseball this Spring for lacrosse. His favorite sport, though, is soccer. He loves talking sports with Mike. He loves talking, in general. Last night, he was so excited to hear a song that begins, "My grandpa fought in World War II. ." He wishes he got to know you Dad.

I don't know what he'll be when he grows up; but I know who he will be: your grandson, always.

I always knew you would have limited time with your grandchildren. I can't imagine how that felt for you--knowing, as you always told me, that you "can't live forever, Tricia!" You always tried to prepare us; but in retrospect, I think you were trying to prepare yourself.

You did really good, Dad. I know you worried that you didn't. But, you did so good. I am so sorry you aren't here. We wish you were.

I love you. Happy Birthday.