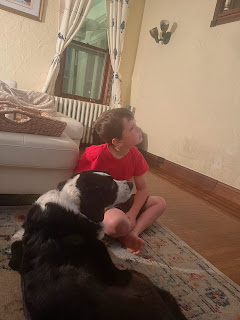 We attempted to have family movie night tonight. It both began and ended in disaster. In fact, as I write this, the only way members of my family will speak to me is to say something in a poisonous voice. I fully expect that upon reading my review, my family ceases speaking to me altogether.
BUT I CANNOT BE SILENCED! I am a writer!
Anyway, movies do bring on strong feelings, don't they?
The movie, in question, was the latest remake of West Side Story. There was tobacco use, which apparently I missed, but caused triggers amongst our family. There was violence (I mean it is a GANG movie) and now I feel like I am living in the midst of a gang war without the professional singing and dancing.
So, if you love peace and calm, DO NOT WATCH WEST SIDE STORY. If you enjoy family irrational family arguments and the bubbling up of long held resentments, DEFINITELY WATCH WEST SIDE STORY.
I get it, it is a sad, sort of ridiculous story. Tony knew Maria for like 24 hours; but somehow they were bonded until death (which also happens 24 hours later). And no one is comfortable with gang fights and stabbings; even if the choreography and costuming is on point.
As an aside, the costuming was really fantastic. If we are ever stand to be within 3 feet of one another again without fighting and I remember to schedule family photos, I am taking color palette inspiration from the 2021 version of West Side Story.
However, the costumes fail to make the characters likable; with the exception of Anita. I am still rooting for Anita and her post Sharks-Jets life. The rest of them are total losers.  I don't remember feeling that way when I've watched other West Side Story versions. I also wonder if this lack of likable characters is what truly made everyone on edge. If everyone seems so awful, it makes you wonder if maybe you are also unlikable and awful or maybe you begin to notice how unlikable and awful your family is? I mean, I think they are all wonderful. But they clearly have other opinions. . . . .
Before the movie began, Nicholas was upset it was not Batman; but was then upset over the violence (strange, since he spends his afternoons fashioning spears out of bamboo) and tobacco use. (He's very passionate and a dedicated opponent to the tobacco industry, apparently.).  He had a brief moment watching the movie with our dog Henry (see the picture); which ended with Henry scratching him and some shouting (not pictured. but you can imagine the shouting about being scratched, the shouting about the shouting about being scratched and through it all the dog kept watching the movie, so I think he disagrees with the family disdain.).
Chloe was upset because everyone was annoying (She had placed a blanket over her head and napped during most of the death.) and because she decided everyone would blame her for the movie choice (I mean if she takes the blame it keeps the shade off of me. .).  Mike was upset because it was all horrible and like eight people were murdered (a valid complaint) and the cat peed somewhere (not in the movie, but in our home) and he wanted to have a nice night. Lily was upset because she said she knew this is how it would end (both the movie itself and family movie night) and because she is a teenager and therefore always right and also very contrary.
I was not upset. Well, at the beginning I was upset, because of the Batman movie whining of Nicholas. Then I calmed down and enjoyed the gang fight dancing and the accelerated plot line that aligned in believability with the dancing gang members. Then, like the rest of my family, I jumped in the melee and began saying: "I DON'T KNOW WHY EVERYONE IS SO HYSTERICAL." I said this at least seven times.   Then, I was yelled at for a slew of crimes and misdemeanors unrelated to West Side Story, which resulted in me slamming a door.
Maybe we can have a family dance-off tomorrow.
I haven't experienced this level of emotion over a fictional movie since Mike tricked me into watching My Dog Skip, which is the worst, most vile movie ever made and should be banned everywhere, including outer space. I am still angry Mike made me watch this and as I soon as I hit publish, I plan to yell at him about it.
I know, it's all very dramatic.
But, their dislike of the movie did give me a Yoke, when I had none, so I guess that's something.
Stay cool, friends.
Posted by Trish Adkins at 8:23 PM