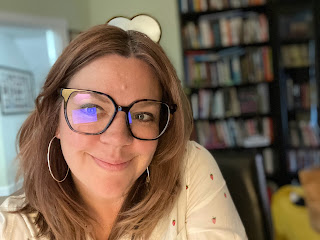 Yesterday afternoon there was a insect flying and buzzing around in my home office. I thought it was a giant fly--I could never get a good look. Then, in the evening I came upstairs to moderate some social events for work and to write my blog and heard the buzzing again.

This time I saw it and it was a very large bee.

Since I am allergic to bees, I was filled with terror which translates to avoidance. I kept on writing and pretended it was not happening. I yelled downstairs there was a bee, but without passion. I finished my work and shut the door, with the bee inside.

This is basically how I manage my entire life--hope, disbelief, brief paralysis, denial, trudging ahead, pretending everything is fine, half-assed attempts at fixing things and then avoidance.

I had to return to my desk this morning and while I was on the phone with a colleague, I shall the bee again and asked her how I should kill it. She suggested a rolled up catalogue; I opted for my ring light. I squashed the bee, but the body seemed to disappear.

Anyway, a couple hours later, I heard buzzing behind the radiator.

The bee had reanimated, like in the Walking Dead.

I texted several people, including the colleague from the morning (she had nothing again.). Someone suggested I look under the radiator.

But, I could not to that! I could not risk being stung in the eye by the zombie, reanimated bee.

The buzzing continued. I mentioned on a conference call. (Some people laughed. No one was concerned about the zombie bee.) The buzzing then moved overhead and I decided it was time to take action.

So I shut the door and left again. Because, I had already gone through all the steps above and it was time, friends to return to avoidance.

When I returned from picking my new glasses (they are GIANT, see picture), I decided that I could look under the radiator, using my new giant glasses as if they were safety goggles. Upon looking, I found a stale baguette, a Wyndham hotel pen and several partially melted crayons from 1962 (they were very vintage!). BUT NO BEE.

I know you have been wondering how I get any work done with all of this. The answer is that I am v. v.v.v.v. brave, good at multitasking and also used to a constant level of chaos and drama.

Anyway, I decided to be brave and armed with my unopened package of Benadryll and an expired epi pen, I continued on with my work for the day. I also decided NOT to tell anyone about this, because I do overshare the mudane bits of my personal life and I thought maybe I could try to just be normal for one hour or less, depending.

A little while later, I got up to get some water and noticed approximately 756 ants on the floor by the door.

So, I screamed out loud, as a grown woman does, sent a text to my children about how they leave food all over the home and now we have an ant infestation and then I went to get the hair oil spray I do not like and now use to exclusively kill bugs.

I mean bees and ants!

After I oiled the ants (who did not die, but seemed to simply get very shiny), I used a tissue to pick up the food they were swarming. I assumed it was a jelly bean or something, as jelly beans often fall out of my son's pockets.

And alas, the food, was the BEE!

Apparently to get rid of bees in your home, you need to have jelly beans that attract ants and then the ants will do the work for you.

The moral of the story: LET THE EXPERTS DO THE WORK FOR YOU!

This blog post is dedicated to the brave ants who killed my bee for me. I promise my son will leave you a trail of Doritos and Jelly beans.