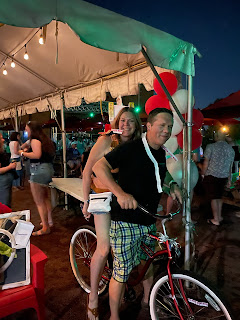 In true Adkins fashion, we were the 3rd winners tonight!

We were the third number called in a raffle to win a beach cruiser bike! The first two tickets called were no shows. I imagine they were kidnapped or were hearing impaired or were drunk or were trapped in the bathroom.

But, NOT OUR PROBLEM (unless we are now witnesses to a crime, wouldn't be the first time)!  Because a 3rd winner is a still a winner and our name is written down in the official record books as the winners!  Which is wonderful, because as Dad Dan from the 25th Annual Putnam County Spelling Bee (I've seen the musical twice in less than 24 hours!) says:

Okay, I do not actually believe this at all. But it does make me laugh out loud over and over again.

And again. I am still laughing and having trouble typing.

I think there is a tiny piece of each of us that worries that God does in fact hate losers. And of course, "each of us" excludes the following people: atheists (since you don't believe in God), people who attained enlightenment of some sort (I don't know anyone like this but I suppose they exist) and of course, the dead, because they are like, beyond over all this human angst stuff.

And isn't it fun to laugh at the absurd beliefs we carry with us? Like if we lose something, anything, it is somehow a sign of how God hates us OR it is what makes us unworthy. I mean, it is so ridiculous.

A raffle is the perfect example. We all buy the same tickets. We all do the same thing. And then most of us lose. Life is the same: we try to do all the right and same and different, but still same in the end things. Sometimes it aligns as we plan. And then sometimes, it does not. Really, often it does not.

I think all of us are afraid to lose and afraid to admit we've lost and afraid to admit that losing upsets us, too much, especially when it is something that we think is inconsequential because doesn't God and the universe and the world hate losers? Even just a little bit?

Well, not tonight, because tonight, I am the wife of the 3rd winner.