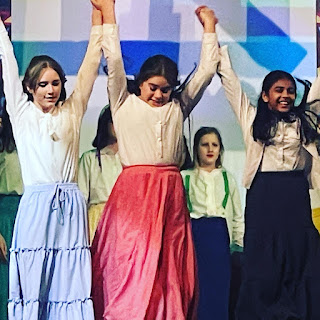 Somehow, our kids have become theater kids. (They are also church choir, soccer, lacrosse, field hockey, dance, flag football, crew and swim team kids. They are busy!) But, theater, well, that's the spot where I seen them stretch and grow in ways that have been both uncomfortable and glorious.

Performing is hard. It's not just the spotlight on the stage or the endless practices. It is the teamwork and the ego and the letdowns and the lack of control and the letting go of everything.

There has not been one show that one of my children haven't been in tears over or screaming or in the case of when all three performed together, engaged in sibling domestic altercations.

You might be wondering why in the world we continue on with all this drama around drama? Why do we subject ourselves to the endless madness?

Look, I am not entirely sure.

But, I do know that hard things are worth it and every single tear over a play is born from a place of growth. Today, Chloe called me from her matinee upset that four classmate actors were home sick. I thought she was worried about getting sick; but that wasn't it. Chloe was so worried about the show--she said, "Mommy, we worked so hard! They worked so hard!"

Chloe learned the value of teamwork and that when you are on stage, you are a family. And then she learned that the show must go on, right? You pivot, you smile, you dance, you sing and you do it, together, because you worked so hard.

And she learned that even though nothing is under your control; when you are prepared, you can get through anything. And you know, Chloe took her final bow and met us in the lobby just filled with joy and accomplishment and pride--not for herself, but for her cast mates. They did it all together.

Lily was upset today, too. The show she is working on isn't going the way she wants. It's hard. I want to write letters and swoop in and save her. But, the heartache and the struggle, well, you don't always get what you want; but you still have to show up and do your best. And I know my Lily, she'll be shining on opening night, no matter what her role and she'll do it, not for herself, but for her cast mates.

And Nicholas, of course, well he's learned what it is like to be on stage. He reminisces about his Annie days nearly daily. He misses the camaraderie and he's grown in his appreciation for the hard work it takes to put a show together. It's hard. It's exhausting. But, it's worth it.

I know if I asked my kids, even on their hardest theater day, if they wanted to give it up, they'd do that thing they do whenever I say something crazy: blink and yell, "NO MOM! WHY WOULD I EVER DO THAT! I LOVE THE SHOW!"